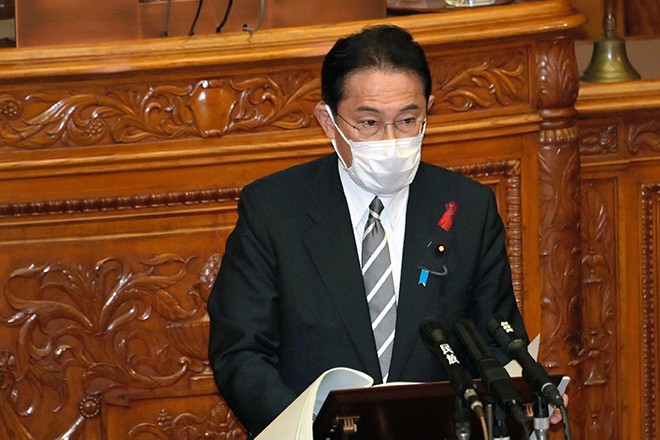 In his first policy speech to the Diet, Prime Minister Fumio Kishida pledged to work toward realizing a “new capitalism” where the middle class would share in more of the country’s economic benefits.

Kishida delivered his address, emphasizing economic growth and fairness, on Oct. 8 to both chambers of the Diet.

He said that in order to deal with the pressing issues facing the nation, such as the novel coronavirus pandemic, there is a need for the political class to be trusted by and empathetic with the public.

Highlighting his past views on the importance of listening to the public, Kishida said his Cabinet ministers would engage in small group dialogues with members of the public.

He said he wants to create a new kind of capitalism by generating a “positive spiral of growth and redistribution of benefits,” and cultivate a “new, post-COVID 19 society” that is prosperous.

Kishida placed his strategies for growth and redistribution as the two main pillars of his economic plan for the country.

On his game plan for growth, Kishida said he would compile a road map for a clean energy future based on renewable energy and nuclear power to create a carbon-free society in 2050.

He said the government would draft legislation that would promote economic security by strengthening supply chains of parts and materials.

Kishida stressed the importance of his government’s redistribution strategy, without which he said there would not be a next growth cycle.

He also said he plans to step up government monitoring of subcontractor transactions.

He reiterated his intentions to give tax incentives to companies that raise employee salaries.

Kishida said his government will establish a new committee to ensure those working in areas such as nursing, elder care and child care are paid more.

On fighting the pandemic, Kishida said his administration would press ahead with preparations to inoculate the public with a third dose of COVID-19 vaccine and identify an oral drug treatment for the illness before the end of the year.

He also stressed plans to use electronic vaccine certificates and establish a free testing program that does not require reservations.

Kishida also touched on the public’s dissatisfaction with the handling of the pandemic by his predecessor, Yoshihide Suga. Kishida pledged an evaluation of what caused bottlenecks to emerge in the government’s management of the health crisis.

He said his administration aims to pass bills that would strengthen the Cabinet’s command post dealing with the pandemic, give the government greater authority to restrain pedestrian traffic and strengthen the medical care structure of the country.

In foreign affairs and national security, Kishida touched on the need for a free and open Indo-Pacific region and the importance of protecting human rights in the international community. He said he would shore up ballistic missile defense and that he would address new challenges, such as those in economic security.

As a Lower House member representing Hiroshima Prefecture, Kishida also said he would work toward a world without nuclear weapons.

Regarding constitutional revision, Kishida said, “We must conduct constructive discussions that go beyond the ruling and opposition party framework and deepen discussions that also include the general public.”

In concluding his address, Kishida stressed the importance of creating a team in which everyone could feel they were moving forward.