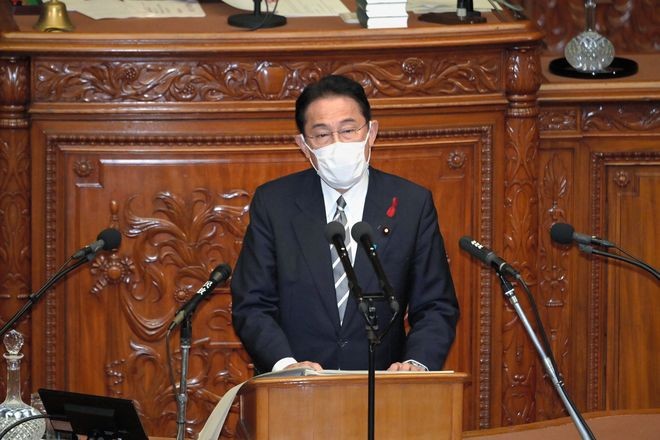 In his first formal policy speech, Prime Minister Fumio Kishida failed to lay out a specific vision for what he calls “new capitalism.”

He did not even refer to the issue of “politics and money” despite its crucial importance for his efforts to regain public trust in politics.

Kishida clearly has a long road ahead to deliver on his pledge, made at the outset of his speech, to “win the trust and sympathy” of the people through his politics.

His administration’s key policy principles and promises described in the address were in line with his campaign platform for the ruling Liberal Democratic Party’s leadership election last month.

But many of the ideas have to be fleshed out. He has yet to offer a clear and detailed policy vision that provides voters with sufficient information to decide whether to give him a mandate to govern the nation in the Lower House election expected to be held at the end of October.

Regarding the urgent challenge of dealing with the new coronavirus pandemic, Kishida promised to offer meticulous explanations to help the public clearly understand his policy decisions and actions and also to ensure that the nation will be prepared for the worst.

But the entire picture of COVID-19 safety measures he has ordered his ministers to work out remains unclear. It stands to reason that Kishida promised to make a thorough analysis and assessment of the responses the government has made.

He needs to learn lessons from the failed pandemic policies of his two predecessors, Shinzo Abe and Yoshihide Suga, to make better responses to the anticipated sixth wave of COVID-19 cases and map out plans to handle a future outbreak of a new infectious disease.

As for his economic program, Kishida stressed that he will lead the nation away from the neoliberal economic policy, which he argues has generated disparities and divisions. But he has left the task of developing specific plans to achieve this goal to an envisioned advisory council for realizing new capitalism.

He proposed to offer tax incentives for companies raising wages as a measure to promote redistribution of wealth to workers. But this idea was adopted by the Abe administration and produced no notable effects.

Kishida’s speech did not mention the proposal to increase taxation on income from financial investments, which was part of his campaign platform for the LDP presidential election. If he is unwilling to push through tax reforms to promote distribution, his commitment to rectifying economic disparities will be called into question.

He needs to craft a comprehensive national security strategy that is not biased toward strengthening defense capabilities but is rather anchored in diplomacy.

As a prime minister hailing from Hiroshima, Kishida vowed to make all-out efforts to help the world move toward a future without nuclear weapons. This pledge should be welcomed.

A good start would be a decision on Japan’s participation as an observer in meetings of state parties to the U.N. Treaty on the Prohibition of Nuclear Weapons.

One of the keywords he repeatedly used during his LDP presidential campaign was missing from his Diet speech--“tolerant politics.” He did not talk about his view that the nation’s democracy is in a crisis or proposed any measure to restore public trust in politics.

Kishida instead stressed that his administration will work to help the nation overcome the pandemic and social divisions and open up a new era with the “power of bonds” between people. He may have wanted to focus on forward-looking messages.

But he should not forget that he cannot win the “trust and sympathy” of the people if he fails to remain firmly committed to the ideals with which he started out.