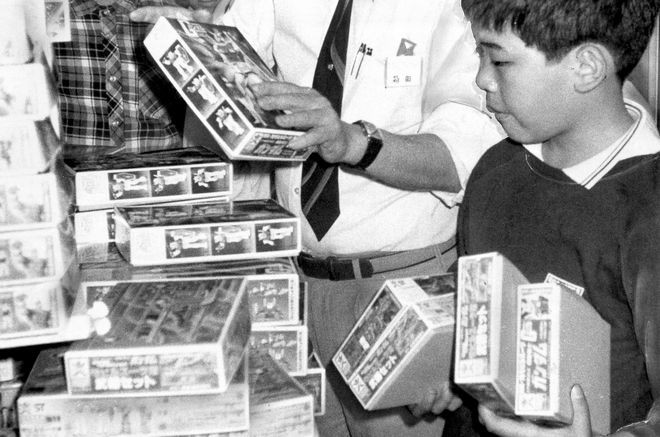 A child buys plastic model kits based on robots from the "Mobile Suit Gundam" anime series in May 1981. (Asahi Shimbun file photo)

A nostalgic story shared on social media by a military photojournalist about how his old neighborhood toy shop served as a social gathering place has tugged at the heartstrings of many from his generation.

Back in junior high school, Masayuki Kikuchi frequented a toy shop about 15 minutes from home by bicycle.

It was a fixture on the corner of a residential neighborhood. It sold plastic model kits of robots from the "Mobile Suit Gundam" anime series, model trains and airsoft guns.

Kikuchi, who is now 46, had been a long-time patron of a candy shop in the area during his elementary school years. The next was the toy shop. As a kid, it was fun for him to hang around there and go window-shopping.

A table and chairs that sat next to the counter were usually occupied by college students chatting up the owner.

Kikuchi shared a common hobby with those students. Even though he was much younger, the college students treated the boy as if he were one of their own. They would offer advice on how to build kits and provide him with tools.

Although Kikuchi was at an age when he had few opportunities to interact with adults, he felt comfortable being there.

One day, an older woman came to the shop and asked the owner to sell her one of the plastic models built by regular customers that was on display in the store window. She said her grandchild wanted it.

The one who assembled the plastic model happened to be in the store and offered to give it away.

But the woman said she couldn't allow herself to accept it for free and took out a 10,000-yen ($89) bill from her wallet.

The student firmly declined the offer, saying it was too much. But the grandmother insisted he should take it.

Kikuchi was left wondering why he couldn't take the money when she was so adamant about it. He could not help but feel that living as an adult would be difficult and confusing sometimes.

Eventually, the modeler decided to accept the money. He removed fragile parts and wrapped them tightly in tissue paper before giving the model to the grandmother so that it would be easier for her to carry around.

When Kikuchi visited the toy shop another day, he saw the modeler sitting at the table for regulars, talking about how he intended to build plastic models to return the favor.

He explained that he couldn't accept that much money when he was not a professional builder, adding that he would continue building models for her to make up for the money.

It turned out the grandmother lived nearby, and the modeler contacted her through the shop owner.

The college student gave her other completed plastic models several times after that. Kikuchi was present for one of those moments.

When the grandmother came to the shop to receive the model from the student, the modeler suggested she try her hand at making plastic models.

At his encouragement, she bought an easy-to-assemble Gundam model kit for several hundred yen.

More than 30 years later, in early August, Kikuchi saw a news story about how many privately owned shops had shuttered one after another.

It reminded him of the toy shop from his childhood.

The new coronavirus pandemic appears to be playing a role in the series of closures, but the times are also changing.

Kikuchi remembers the toy shop as a forum for interaction between generations.

He cannot even remember their faces, but there was always someone in the shop who helped others in trouble.

He is certain that most people from his generation had a similar experience.

But social media and other internet forums might fill that gap for young people nowadays.

The military photojournalist sometimes receives direct messages from junior high school students, who say they want to know how to join the Self-Defense Forces or go out in the field as a journalist, just like Kikuchi.

He makes sure to answer their questions as politely as possible, just like the college students at the toy shop who kindly taught him many things.

When Kikuchi posted his story about the toy shop on Twitter, it generated a huge response.

"The model shop I used to frequent was just like that," one user said.

"Money can't buy that space and that memory," said another.

Kikuchi thinks those who had similar experiences sympathized with his story. But at the same time, he feels that is because they have a strong desire for these kinds of places to exist today.

Since the pandemic has left people unable to meet with their loved ones and friends in person even if they want to, that is all the more reason to want a place to connect with others, Kikuchi thought.