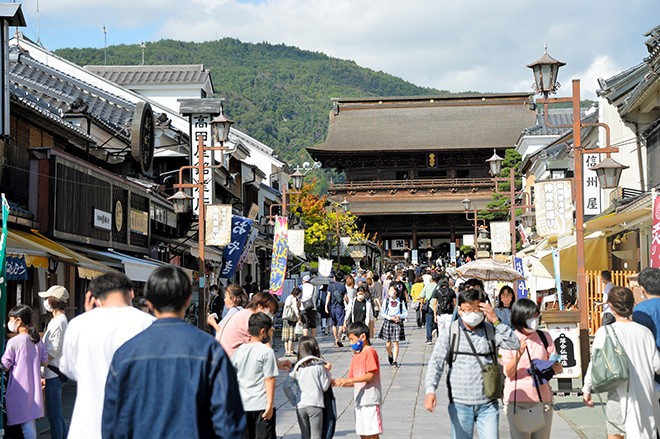 Visitors flock to Zenkoji temple in Nagano on Oct. 2 after the state of emergency over COVID-19 was fully lifted. (Kazuki Endo)

The government has started a trial run of the discount-filled Go To Travel campaign but insisted all safety precautions against COVID-19 will be made before a full resumption of the tourism promotion program.

The test run involves 38 tours hosted by 11 travel companies designated by the Japan Tourism Agency and will continue until mid-November.

The government is expected to give favorable treatment to travelers who have been fully vaccinated against COVID-19 once the campaign resumes in full.

Such people will be exempted from restrictions on traveling from prefectures where a state of emergency is issued.

The government will also consider giving a favorable discount rate to small businesses in the campaign.

The trial run is aimed mainly at testing revisions in the operations, such as how to check the validity of vaccine certificates.

But it remains unclear when the campaign can actually restart.

The central government said it will conduct a survey on participants of such test tours and travel companies to clarify any potential problems.

The government will then consider when to resume the campaign based on the trial results and the COVID-19 situation.

The government was criticized last year for continuing the Go To Travel campaign, a pet project of then Prime Minister Yoshihide Suga, when the novel coronavirus was spreading rapidly nationwide.

“We will hold careful consultations with experts to prevent the Go To Travel campaign from becoming a cause of infection spread,” Tetsuo Saito, the minister of land, infrastructure, transport and tourism, told reporters on Oct. 6.

The government will also discuss implementing a sliding scale of discount rates to spread the number of travelers across the week and avoid congestion on weekends.

It started in July 2020. But as the COVID-19 pandemic worsened, the program was halted in late December that year.

Of the campaign’s total budget of 2.7 trillion yen, about 1.3 trillion yen remains unused.

The government has been using the remaining budget funds in a prefecture-level tourism support project, subsidizing 50 percent of trips costing up to 5,000 yen per person per night. Only those living in each prefecture are eligible to receive the discount.

As of Oct. 7, 19 prefectures were involved in the project.

It is possible that the local tourism project will be expanded before the nationwide Go To campaign resumes.

(This article was written by Sho Hatsumi and Shinya Takagi.)