Major lines operated by East Japan Railway Co. in the Tokyo area were temporarily suspended on Oct. 10 after a fire broke out at an electric power substation in Saitama Prefecture. (Part of the footage provided by a resident) 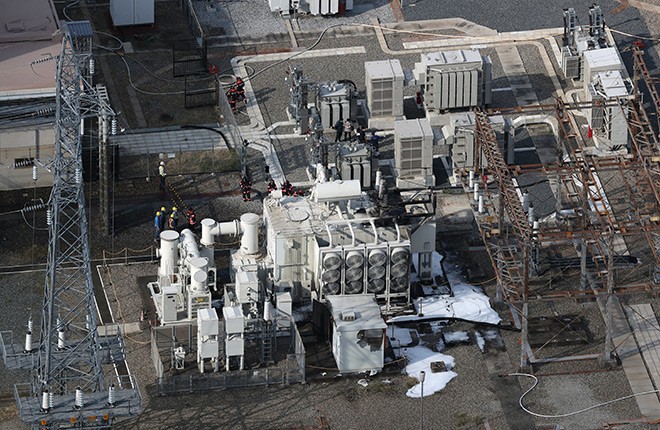 Major lines operated by East Japan Railway Co. (JR East) in the Tokyo area were temporarily suspended on the afternoon of Oct. 10 after an electrical fire broke out at a substation in Saitama Prefecture, the company said.

By 3 p.m., all of the lines, except the Keihin-Tohoku Line between Akabane and Omiya stations, the Utsunomiya Line and the Takasaki Line, had resumed operations.

Delays, however, have occurred.

The three lines are expected to resume services around 8:30 p.m., a representative of JR East said.

Around that time, the Warabi Fire Department in Saitama Prefecture was notified of a fire at JR East’s electric power substation.

The company said the fire likely caused the power disruption.

Black smoke was seen spewing from the unmanned 25-square-meter facility that stores electric equipment, such as transformers, located in the Tsukagoshi area of Warabi city.

One resident living near the substation reported hearing an explosion, according to Saitama prefectural police.

Six fire engines and other vehicles tackled the blaze and brought the fire under control by 1:30 p.m.

No injuries were reported, police said.

The suspended train services stranded a large crowd of people at an entrance gate of JR Kawagoe Station in Saitama Prefecture around 2 p.m.

A 56-year-old woman who lives in Kasukabe in the prefecture checked a train route map with a glum look on her face.

She had visited her son’s home in Kawagoe and was on her way home after lunch.

“Various lines have been suspended. How should I get home? I need help,” she said.