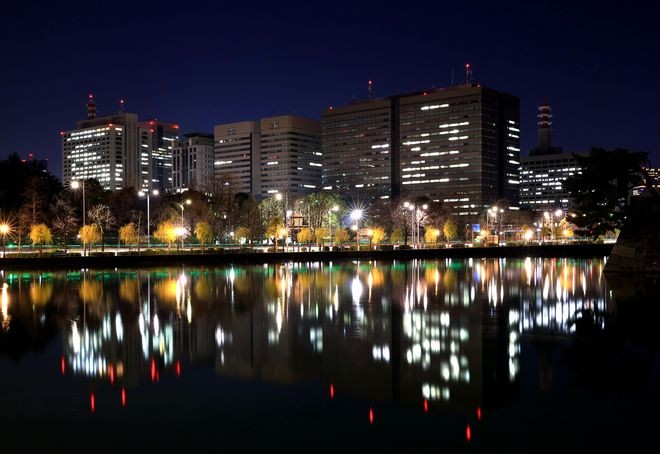 Many offices at the health ministry, far left, remain lit past 9 p.m. in the Kasumigaseki district of Tokyo during the COVID-19 pandemic on Jan. 4. (Hikaru Uchida)

Although the government has helped to reduce overwork in the private sector, its own offices have remained bastions of long working hours and unpaid overtime.

Ministries and other central government offices are requesting a total of 38.5 billion yen ($344 million) in the fiscal 2022 budget for expected overtime pay for their workers, an Asahi Shimbun survey found.

That figure is up 18.4 percent from the overtime amount in the initial budget for fiscal 2021 and reflects the actual working conditions of government workers.

The prime minister’s office recently instructed ministries and agencies to provide overtime payments commensurate with the hours their workers have actually put in.

Questions about the working conditions of bureaucrats prompted Taro Kono, then state minister in charge of administrative reform, to conduct a fact-finding study in autumn last year.

The guidelines instructed ministries and agencies to get a better grasp of their employees’ working hours and request necessary allotments for overtime payments in the fiscal 2022 budget if internal budget reallocations do not provide sufficient funds.

The Finance Ministry is expected to approve the budget requests after scrutinizing, for example, if work has been streamlined sufficiently.

The Asahi Shimbun surveyed the overtime allowances requested in the general account budget for the headquarters of all 11 ministries, the Cabinet Office and the Cabinet Secretariat.

The survey did not include requested allocations for their regional offices and other external organizations.

The Environment Ministry requested 1.26 billion yen, up 47.4 percent from the corresponding allocation in the fiscal 2021 budget. It was the highest increase among the ministries.

The runner-up was the Ministry of Health, Labor and Welfare, which requested 5.36 billion yen, up 34.6 percent. The ministry has often been singled out as having particularly tough working conditions.

The overtime budgets for those 13 government offices only increased between 1.1 percent and 3.8 percent year on year during the five years through fiscal 2021.

In the past, some overtime budget requests were based on the amount provided for the previous fiscal year, with workload variations and other factors taken into account. Actual hours worked were not a factor.

Central government employees are not covered by the Labor Standards Law. Their working conditions and other terms are provided by special laws and by rules of the National Personnel Authority.

NPA provisions entitle them to receive overtime pay for after-hours work ordered by their supervisors.

In reality, however, government overtime work is often officially recognized based on budgetary limits, not actual hours worked.

“I cannot but say that unpaid overtime is in constant practice,” Kono said.

A government-led initiative for “work-style reform,” whose goals include prevention of overwork, has made headway in the private sector.

Many businesses are now attaching importance to a work-life balance and are striving to reduce unnecessary overtime work.

But in the public sector, working deep into the night continues to be the norm in the Kasumigaseki district of Tokyo, the seat of many ministries and agencies.

Some have called the district a “nightless castle” because the lights seldom go out in many government office buildings there.

Kono ordered the Cabinet Bureau of Personnel Affairs to look at the working conditions of the 51,000 bureaucrats in Kasumigaseki as of last autumn.

Its study found that more than 10 percent of the bureaucrats were putting in more than 80 hours of overtime a month, the threshold used to recognize “karoshi,” or death from overwork.

Thirty-two percent of career bureaucrats in their 20s were logging more than 80 hours of overtime a month, while 17 percent of them were working an extra 100 hours or more a month.

Word has spread about these long working hours and is now having a negative effect on the recruitment of new central government employees.

The number of applicants for the annual spring national public service examination for career-track bureaucrats has declined for five straight years. It was down 14.5 percent year on year in fiscal 2021.

The NPA asked around 700 rookie bureaucrats who began working in Kasumigaseki in spring about ways to improve the recruitment drive.

“A reduction in overtime and late-night work” was cited by 80.7 percent of the respondents.

To decrease the burden of bureaucrats, the government is planning a variety of measures, including streamlined work through digitization, promoting telework and outsourcing tasks.

These reforms, however, could take years to realize.

Many of the measures will also require reform on the part of the Diet.

One task that often keeps bureaucrats stuck in their offices is preparing lawmakers’ responses in the Diet.

Often, a lawmaker will send a notice late at night to a ministry about a question expected to be asked in the Diet. The bureaucrats must stay up all night preparing a long list of proposed answers for the minister while coordinating with different parties.

“Bureaucrats cannot change the way they work as long as politicians remain unchanged in what they do,” a senior Finance Ministry official said.

“Regulations on upper limits for overtime hours should be applied to government employees as well,” Komuro said.

Komuro suggested the introduction of a working-hour interval system, which guarantees a specified time-off period between work shifts.

(This article was written by Ken Sakakibara and Takashi Yoshida.)