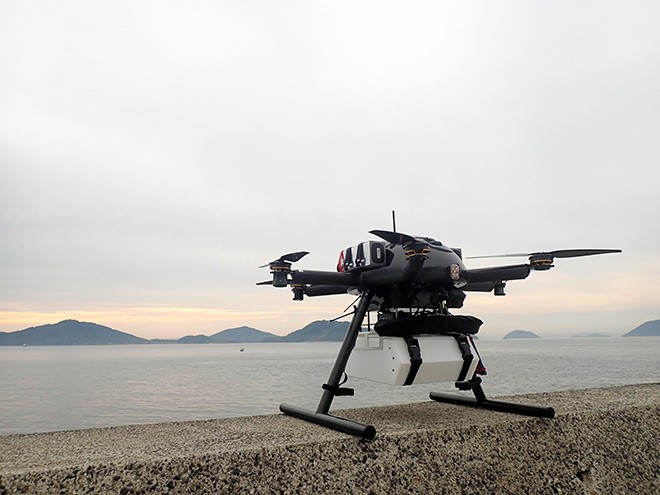 MITOYO, Kagawa Prefecture--Drones are taking parcel deliveries to new heights on a remote island where demand is high through a new service touted as the first of its kind in Japan.

About 30 meters above the Seto Inland Sea, a small, unmanned aircraft glides through the sky. It left Suda Port in Mitoyo for the Awashima islet four kilometers away and, after its seven-minute flight, arrived and automatically unloaded the package all on its own.

On a clear day, this is a typical scene. However, the island frequently has inclement weather, which has proven to be a major challenge for the service’s development and expansion.

But since there is only one small, family-run grocery store on Awashima, grateful islanders hope the novel delivery service is here to stay.

“It will prove to be of great help if a wider variety of products become available for delivery,” said resident Takeko Asakura, 44.

Kamomeya Inc., a start-up based in the prefectural capital of Takamatsu, launched the service in August for the tiny island community, which has a population of 170.

Delivering a package costs just 500 yen ($4.45). If a customer places a shipping order in the morning by phone, the goods will reach them later that same day.

A local convenience store operator has partnered with Kamomeya, offering 40 kinds of items that can be delivered, including instant noodle cups, sweets and pet food. But only a package of up to 1 kilogram can be flown to the island at a time.

Although drone test flights for commercial purposes have been carried out nationwide, Kamomeya President Masato Ono said he believes it to be the first time a private business has relied on an unmanned aircraft for transportation on a full-fledged basis in Japan.

Ono, 43, who hails from Mitoyo, worked for a company affiliated with the mobile carrier NTT Docomo Inc. before he became a freelance internet service engineer.

He decided to set up his own company in 2013, when he relocated to a remote island in the Seto Inland Sea after volunteering for an international art festival there.

On the far-flung islet, Ono found that the ferry ride to make a typical daily shopping run would take half a day.

One day, he stumbled upon a promotional video by online retailer Amazon.com Inc. about a drone delivering ordered goods to a suburban home.

As he watched the footage, Ono instinctively felt “this would work” in his own neighborhood.

Ono sought out manufacturers of radio-controlled planes and phoned them, hoping he could commission drone production for his business. It was an unusual request at that time, when even drones for aerial photography were not common. His offer was snubbed.

But he did not give up and continued asking around for help until he eventually found a manufacturer that finally agreed.

The president of the company told Ono to assemble a drone on his own following his instructions.

The reasoning behind this was that it would force Ono to learn the ins and outs of the aircraft from firsthand experience. The president said if Ono agreed, he would waive the design fee so Ono would only have to pay the material costs.

Over the course of a month, Ono learned how to build and operate a drone.

“Unless the president had found my project interesting and worked with me, I would not have been able to become what I am today,” said Ono.

Following a series of flight tests, Ono solicited investors and began the shipping service eight years after he developed his business plan.

Now his biggest challenge is overcoming the elements. The effects that rain and wind have on the aircraft’s operations turned out to be a lot more severe than he initially expected. The drone can only operate about 20 percent of the time due to bad weather.

But if he can resolve that difficulty, his drone delivery business could also take off elsewhere.

There are more than 400 remote isles with people living on them in Japan. Islanders are finding it increasingly difficult to access parcel delivery services.

Kamomeya’s corporate slogan is to bring innovation to life on remote islands from the sky over the Seto Inland Sea.

Ono plans to live up to that and is now rushing to introduce a drone more resistant to stormy weather that can fly with a payload of up to 5 kg.