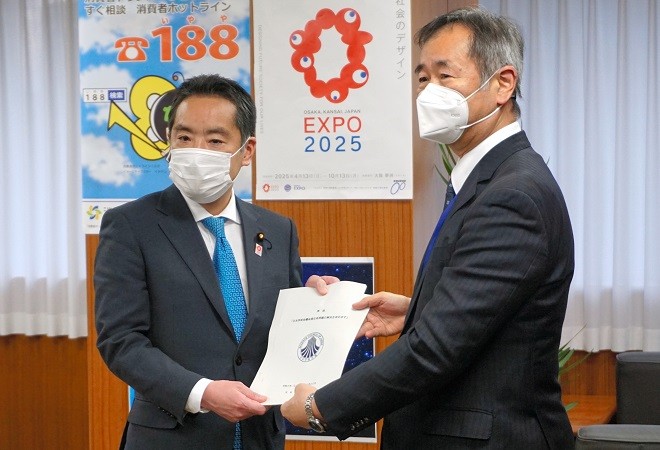 Takaaki Kajita, president of the Science Council of Japan, right, delivers a statement demanding membership to six scholars to Shinji Inoue, then state minister in charge of science and technology policy, on April 22 in Tokyo. (Asahi Shimbun file photo)

One year has passed since Yoshihide Suga, the former prime minister, refused to appoint six of the nominees to the Science Council of Japan, the country’s top panel representing scholars and scientists.

The candidates had been recommended for membership by the council itself.

Suga never explained why he blocked the appointments, although there is widespread speculation that the nominees were rejected because they had made critical remarks about policy measures of the previous administration of Shinzo Abe, Suga’s predecessor.

The Science Council has since remained at odds with the government. How to rebuild their mutual ties has been a major pending issue.

Fumio Kishida, the new prime minister, should admit to the misstep made by his predecessor’s administration and thereby put an end to the unusual situation.

Come to think of it, the Science Council issue represented the first stumbling block for Suga as prime minister.

He trampled on a precedent set decades ago when a government official told the Diet that whoever has been recommended for membership in the Science Council is supposed to be appointed to the body.

And Suga only reiterated that he made his unprecedented decision to deny appointments from the standpoint of a “comprehensive, bird’s-eye” view.

When doing so failed to calm the criticism, he shifted the focus of the argument and had the government and the ruling parties work as one in calling for a reorganization of the Science Council.

Suga’s propensity for being high-handed without fulfilling his accountability surfaced again on a later occasion over measures to cope with the COVID-19 pandemic. That created a deep rift between political leaders and the public, which ended up driving Suga into stepping down.

Takaaki Kajita, president of the Science Council, released an opinion statement late last month in which he reiterated that the government’s measures to date are unacceptable and said it is essential to have the appointment issue resolved so that the council can address societal challenges.

Kishida said, while running for president of the ruling Liberal Democratic Party, that he would have a “science and technology adviser” appointed to serve every ministry.

It is commendable that he is willing to draw on the insight of experts in working out policies, given that we are faced with a mountain of questions that are never easy to solve, such as measures for fighting infectious diseases and coping with climate change.

Policymakers will have to tap into the accumulation of knowledge not only in the natural but also in the social and human sciences, including, as a matter of course, views that are at odds with policies of the administration in power.

The answers will be reached only after the policymakers have lent ears to dissenting opinions of the sort and discussed matters from various angles above and beyond all differences in disciplines and stances.

The eyes of external parties have an increasingly important role to play at a time when the prime minister’s office has come to exert an excessively strong power, causing bureaucrats to cower increasingly before it.

Syukuro Manabe, one of the winners of this year’s Nobel Prize in Physics who is based in the United States, previously led a research project of the Japanese government.

Manabe raised concerns, during a news conference following the announcement of the winners, about the climate of scientific research in his native Japan. People in Japan “should think more about how decision-makers and research scientists communicate with each other,” he said.

The Asahi Shimbun has reiterated in its editorials that the government’s refusal to appoint the nominees amounts to nothing less than an act of applying pressure on academic circles in general, and could threaten academic freedom and undermine the very foundation of democracy.

Kishida said, when asked about his view on the issue during the LDP presidential race, that he had “no plan for overturning personnel appointments.” That would only lead him to follow in the steps of the previous administration, which failed after falling into self-righteousness.

Kishida should begin by appointing the six nominees to mend the government’s frayed ties with the Science Council, which represents Japan’s scholars, and by making sure to listen carefully to diverse opinions.

Kishida has cited an “ability to listen” as one of his strong points. The public is watching to see if he really has that quality.