No progress over financial issues, says ex-fiance of Komuro’s mother 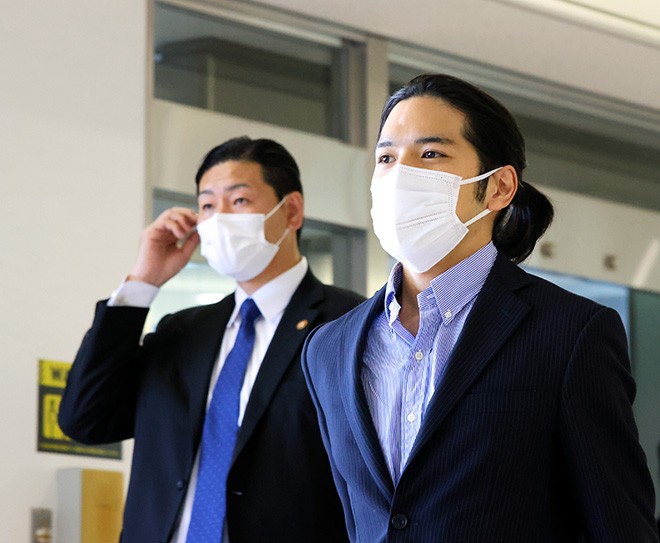 The ex-fiance of Kei Komuro’s mother, Kayo, released a statement through his representative on Oct. 10 saying that there has been no progress in talks to resolve a financial dispute between the former couple.

Demands from the man that Kayo repay money he loaned her while the two were together led to scrutiny of Komuro's background that long sidelined his planned marriage to Princess Mako, the eldest daughter of Crown Prince Fumihito and Crown Princess Kiko.

Kayo's former fiance received a proposal from Komuro’s lawyer saying that Komuro wanted to speak to him about the settlement money instead of Kayo, who is in poor health, according to his statement.

Komuro in April released a document to explain the history of the financial dispute and proposed that he would pay settlement money to the man.

The former fiance responded to the proposal and said, “I could negotiate it through my representative.”

Later, the man asked Kayo to talk to him directly, but she was unwell and no discussion took place.

He said he received no details from Komuro on a possible financial settlement.

“I am asking Kei to tell me what he's thinking, but he has not told me that yet.” He said, “I want to know what Kei, who released the document in April, has in mind when making his proposal."

Regarding Kayo’s ill health and Mako’s recent announcement that she has developed post-traumatic stress disorder, the man said, “I feel a strong responsibility and am truly sorry from the bottom of my heart.”

He said that he had planned to wait to sort out the issue between himself and Kayo, but that changed after the Komuro and Mako settled on a marriage date.

“I intended to wait until Kayo recovered, but I cannot ignore the feelings of Kei, who is going to marry soon. I am trying to think hard to figure out what I should do,” he said.

Kayo and the man were engaged between 2010 and 2012. Komuro’s family received more than 4 million yen ($35,488) from him in living expenses during that time.

A weekly magazine reported the payment at the end of 2017 as a scandal involving financial troubles.

In 2019, the Komuro side explained that the man had told them, “I didn’t intend to get my money back,” and that they “had understood the trouble was already resolved.”

Recently, Kei Komuro’s lawyer and the man’s representative have been talking about the issue, but negotiations have not led to a resolution.

On April 8, Komuro released a 28-page document to “correct inaccurate information” and four days later revealed that he planned to pay settlement money to the man.

Kenji Ikeda, an official of the Imperial Household Agency, said at an Oct. 11 news conference that regarding the ex-fiance’s statement there was “nothing to comment” on.