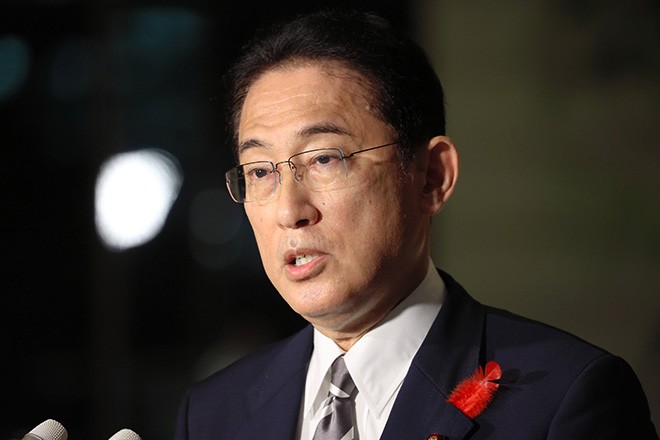 The opposition leader lambasted Prime Minister Fumio Kishida over his abrupt abandoning of plans to increase the tax rate on stock-related income as a way to redistribute wealth in Japan.

“His is an administration in which he cannot stick to his guns and call the shots,” Yukio Edano, head of the main opposition Constitutional Democratic Party of Japan, told reporters when he visited Higashi-Matsuyama in Saitama Prefecture on Oct. 10. “Kishida is a symbol of what cannot make a change.”

The CDP has said the “Abenomics” package of economic measures formulated by the Shinzo Abe administration and carried out by successive governments led by the Liberal Democratic Party have only helped the rich get richer in Japan.

The opposition party said if it wins the Lower House election expected on Oct. 31, it will raise taxes on proceeds from stock sales and dividends to correct the distortion in income levels.

It said it will use the extra revenue to improve the health care system, nursing care and education.

He expressed his intention to reform the tax system to raise levies on income from stock transactions and dividend payments as part of his policy to achieve a “cycle of growth and redistribution” of wealth.

But less than two weeks after winning that election and guaranteeing himself the prime minister’s post, Kishida backed off that plan.

“I am not thinking about touching on taxation of financial and securities transactions for some time,” he said on a news show aired by Fuji Television Network Inc. on Oct. 10. “A misunderstanding is spreading that I will immediately change the taxation system, so I need to dispel concerns among those who are worried about it.”

However, he stood firm on other pledges to prioritize tax breaks for businesses that raise the salaries of their employees, to fatten the paychecks of nurses, caregivers and nursery school teachers, and to increase education and housing assistance for the middle class.

Income tax rates increase for higher incomes, up to a maximum 45 percent.

But the tax rate for income from stock sales and dividends is 20 percent across the board.

If stock-related gains make up the bulk of 100 million yen ($889,917) in annual income, that individual could pay a smaller tax rate than those with lower incomes.

Some LDP officials had voiced concerns that Kishida’s tax review plan could scare away investors from Japanese stock markets.

A week after Kishida formed his Cabinet, the benchmark Nikkei 225 index plunged by more than 700 points.

The main reason for the steep drop in share prices on the Tokyo Stock Exchange was growing concerns about the future of the Chinese economy.

However, some in the foreign media called the decline the “Kishida shock.”

Kishida did not mention the financial tax review in his policy speech in the Diet on Oct. 8, his first as prime minister.