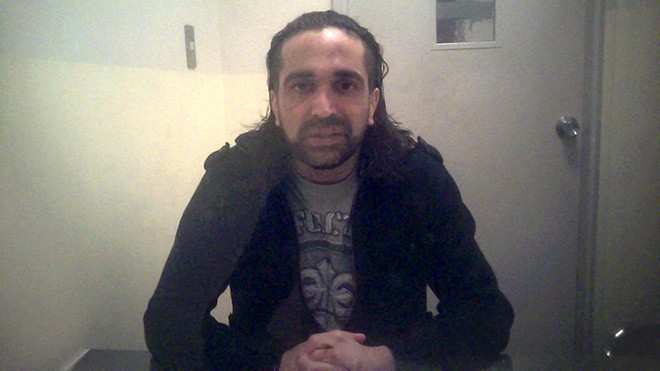 A man speaks about his detention at an immigration facility in Ibaraki Prefecture in the film “Ushiku.” (Provided by Yamagata International Documentary Film Festival)

YAMAGATA--A film featuring secretly recorded interviews with detainees at an immigration facility in Ibaraki Prefecture sheds light on their inhumane long-term detentions as they wait for word on their refugee applications.

The film, “Ushiku,” directed by Thomas Ash, was screened on Oct. 9 in the Perspectives Japan program of the Yamagata International Documentary Film Festival 2021.

Ash, 45, used a hidden camera to record interviews with foreign nationals detained at the Higashi-Nihon Immigration Center in Ushiku, Ibaraki Prefecture, after obtaining their consent. The Immigration Services Agency prohibits visitors from taking photos or videos of their conversations with detainees.

“And they say ‘omotenashi,’ ‘Japan is full of hospitality,’” one of the detainees said in the film. “Is this what you call hospitality?”

According to the interviews, one detainee staged a hunger strike and was granted temporary release from the immigration facility, but resorted to another hunger strike after being detained there again.

Another was forcibly restrained by detention officers who yelled at the detainee, while another attempted suicide.

After premiering in Germany in June, the film was screened at film festivals in the United States, Europe and South Korea and won many awards. The director plans to arrange showings of the film after it was streamed at the film festival in Yamagata, which was held online for the first time.

Many of those detained at the facility said they fled conflicts in their home countries, but their requests for refugee status would not be granted.

“At least they have to tell me that we’re not giving it to you,” one of the detainees said in the film. “They’re not giving me anything. Just detaining me to just waste my life.”

Another detainee said, “I’m so tired of this life. I don’t need this (life).”

The director said he felt that it is his mission to try to improve their plight after he began visiting detainees at the facility as a volunteer in 2019.

“Asylum seekers don’t have the option to return to their home countries even if they wanted to,” he said. “I hope the film will help inspire people to take action instead of just feeling sorry for them.”