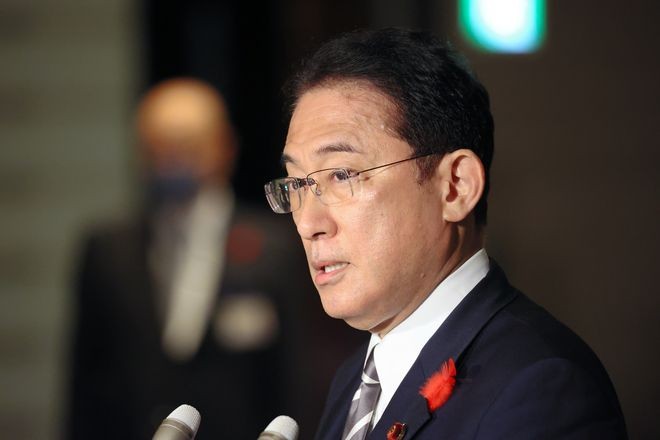 Prime Minister Fumio Kishida speaks to reporters at the prime minister's office in Tokyo on Oct. 8. (The Asahi Shimbun)

A man brags that he only looks at umeboshi pickled plums, but never eats them because they'll be gone if they are eaten. So, he keeps staring at them until he starts feeling their sourness in his mouth. Without missing a beat, he grabs his bowl of rice and wolfs it down.

Another penny-pincher becomes aware of his tremendous good fortune upon moving into a dwelling right next to an "unagi" eel restaurant. The mouthwatering aroma of the broiling eels is all he needs to spice up his cheap meal of plain boiled rice.

These tales elicit laughter because it is normally unthinkable for anyone to just imagine the taste or smell of something delectable to make their plain rice taste better.

But listening to Prime Minister Fumio Kishida's words, I feel as if I am being forced to pretend to enjoy a meal that's just a tantalizing aroma and nothing else.

Whether his grandiose concept of "new capitalism" has any substance is dubious at best.

His policy speech, as well as his answers to questions posed by party leaders, were replete with abstract expressions such as "an ideal cycle of growth and distribution" and "expanding the middle class."

The only instances where he sounded somewhat specific concerned his plans to raise the incomes of front-line nursing, elderly care and child care workers. However, he discussed neither the size of the raise nor the funding source.

And as for his Liberal Democratic Party presidential election campaign slogan of "the Reiwa version of the income-doubling program," it has completely disappeared somewhere along the way.

According to one of the Cabinet ministers in charge of economic affairs, that slogan was meant merely as a "catchphrase" of sorts.

Am I supposed to understand that it was destined to be discarded once Kishida secured the votes of certain LDP legislators and members?

I am worried now about the fate of his other campaign "promises," especially those that "smell delicious."

In rakugo, the tightwad who partakes in the fragrance of broiling eels is visited by the owner of the eel restaurant, who asks to be paid a sniffing charge.

Doesn't the owner remind you somewhat of politicians who come around asking for votes?