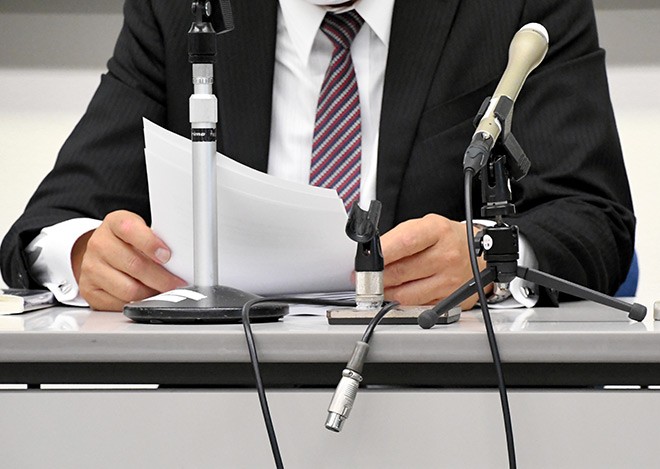 The father of a 13-year-old boy who took his own life in 2011 after being bullied at school speaks at a news conference in Otsu on Oct. 11. (Senichiro Ando)

OTSU--Schools are no better at protecting children from bullying now than a decade ago, the father of a boy who took his own life in 2011 lamented at a news conference here to mark the anniversary of the tragedy.

“Even after 10 years have passed, nothing has changed in the children’s environment,” the 56-year-old man said on Oct. 11 during a news conference.

On that date in 2011, his son, 13, a second-year student of Otsu municipal junior high school in Shiga Prefecture, jumped to his death from the family's apartment after suffering abuse from his classmates.

“Even if 10 years have passed or 20 years will pass, my sadness for the loss of my son never changed and will never change,” the man said, calling for improvements in school education to prevent bullying.

“The same things as in my son’s case have been happening in the latest bullying cases,” he said, lamenting the sad fact that children continue to take their own lives as a result of bullying.

His son endured horrible mental and physical abuse from his classmates.

He was regularly beaten in the classroom and school corridors, and had his textbooks and report cards ripped up. He was forced to “practice” committing suicide and was verbally abused, being told to “drop dead!” numerous times.

After his death, it was revealed that the school and the municipal board of education had tried to cover up the fact that he had been bullied, which led the police to investigate it.

A law to prevent bullying at schools, established in response to the case, came into effect in 2013, requiring schools to detect bullying as soon as possible and report incidents.

At the time, the man thought that some progress had been made to fight bullying by passing the law.

“My child became the law,” he said and expressed hope that his son “should be the last one to lose a life (because of bullying).”

Fatal cases of bullying, however, have continued in schools.

In March, a female second-year junior high school student, 14, from Asahikawa, Hokkaido, was found dead in a park.

The municipal board of education didn’t initially admit it was a case of bullying. After the news was reported, a third-party investigation committee started to scrutinize the case.

The man now feels that despite the establishment of the 2013 law, school and other educational staff are not cognizant of bullying and how to stop it.

“They should prioritize making people aware that diversity is more important than improvement of academic scores,” he said. “I don’t want to see new bullying victims and perpetrators.”

Oketani, a former Otsu municipal school superintendent, was a member of the third-party investigation committee on the bullying case involving the man’s son.

“We should prevent teachers from becoming too busy, and we need policies to thoroughly respect each child’s dignity,” Oketani said.

In honor of the man’s son, staff at the Otsu municipal board of education on Oct. 11 prayed in a moment of silence before their work day began.

Teruhisa Shimazaki, the current school superintendent, called on the staff “not to forget the incident.”