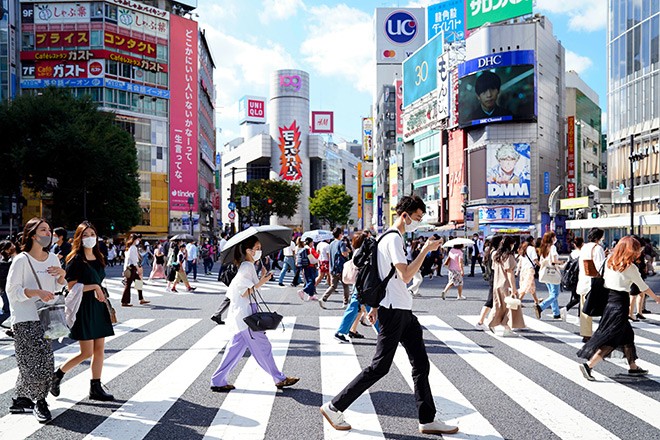 Although the calendar says October, western Japan and elsewhere continue to swelter with record daily highs and average temperatures far exceeding that in a normal year for the first 10 days of the month.

However, relief is in sight.

The summer-like temperatures will likely drop from the end of this week as cool, dry winds are expected to blow from the continental side and bring autumn weather to the country, according to the Japan Meteorological Agency.

In central Tokyo, eight of the first 10 days in October saw the daily maximum temperature range from 25 degrees to 29.9 degrees. On Oct. 11, the mercury rose to 29.3 degrees.

In comparison, there were only three days from Oct. 1 to Oct. 11 in 2020 that saw the mercury reach that range.

As of 4 p.m. on Oct. 11 this year, 120 locations across Japan reported the temperature hitting 30 degrees or up to 34.9 degrees, setting records for October.

In Hita, Oita Prefecture, in western Japan, the mercury shot up to 35.7 degrees on Oct. 3, close to the nation's record of 36 degrees for October.

In Sapporo on the northernmost main island of Hokkaido, the thermometer recorded 27.3 degrees on Oct. 4, a record for the city for October.

In Aomori, just south of Hokkaido, the temperature hit 30.3 degrees on Oct. 4, the latest day of the year to reach the 30-degrees mark in the city’s history.

The heat was carried by a high pressure system in the Pacific Ocean, according to the JMA.

The high pressure system has blanketed the entire Japanese archipelago since the beginning of this month, with the atmosphere over Japan almost similar to that in summer.

The high pressure system in the Pacific Ocean has tended to expand as temperate westerlies, which bring cold weather at this time of the year, moved up north.