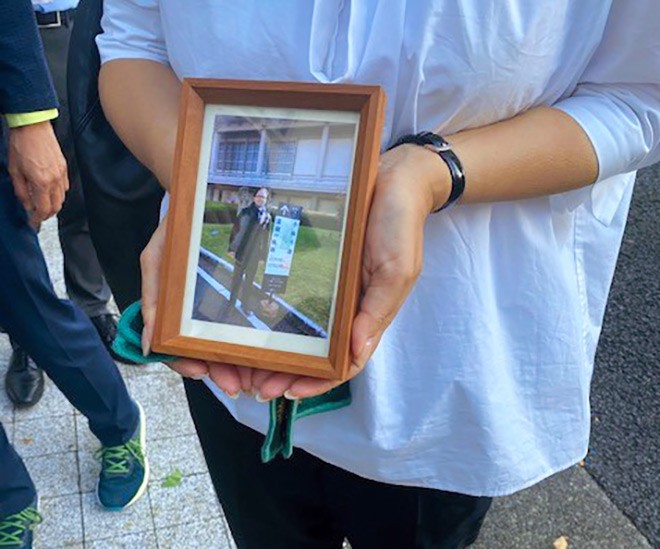 Masako Akagi holds a photo of her late husband, Toshio, while speaking with reporters on Oct. 11 after the Lower House plenary session. (Sachiko Miwa)

The widow of a former Finance Ministry bureaucrat who took his own life after he was ordered to falsify documents on Oct. 11 asked Prime Minister Fumio Kishida to reopen the probe into the Moritomo Gakuen educational institution scandal.

Masako Akagi, the widow of Toshio Akagi, asked for a re-investigation into the falsification of documents related to the sale of state-owned land to Moritomo Gakuen.

Akagi made the request in a letter, which was read out in the Lower House plenary session by Kiyomi Tsujimoto of the main opposition Constitutional Democratic Party of Japan, while she was present.

Her husband, who killed himself in 2018, worked at the Finance Ministry’s Kinki Local Finance Bureau that oversaw the sale of state-owned land in Osaka Prefecture to private school operator Moritomo Gakuen at a massive discount. The operator had cozy ties with Akie Abe, the wife of former Prime Minister Shinzo Abe.

In the letter, Akagi wrote that her husband told higher-ups at the Finance Ministry in Tokyo that it was wrong to falsify the documents.

She also wrote that a society where people were not allowed to say that something was wrong was not normal.

While Kishida said he had thoroughly read the letter, he added that he would consider very carefully whether to respond with a letter of his own to Akagi, considering that the central government is one of the defendants in a civil lawsuit she filed seeking compensation.

Kishida also only repeated past statements, such as that the Finance Ministry had conducted its own investigation into the matter and implemented disciplinary measures.

When asked by reporters for her thoughts after the session, Akagi said, “I had held hopes that Prime Minister Kishida would respond more favorably, so I am disappointed.”

But she was not giving up all hope, touching upon the fact that Kishida has said he considers himself to be a good listener.

“I believe the time will come when his thinking changes,” she said.

Meanwhile, Tsujimoto peppered Kishida with questions about other past incidents, including a money scandal involving Liberal Democratic Party Secretary-General Akira Amari, who resigned his Cabinet post in 2016 because of the incident.

Kishida, however, only said that it was up to each individual lawmaker to decide how to explain past indiscretions.

Kishida also reiterated past stances of his predecessor, Yoshihide Suga, regarding his rejection of six scholars who had been recommended for membership in the Science Council of Japan as well as the LDP investigation into 150 million yen ($1.3 million) that had been sent from LDP headquarters to Anri Kawai when she was running for an Upper House seat in 2019.