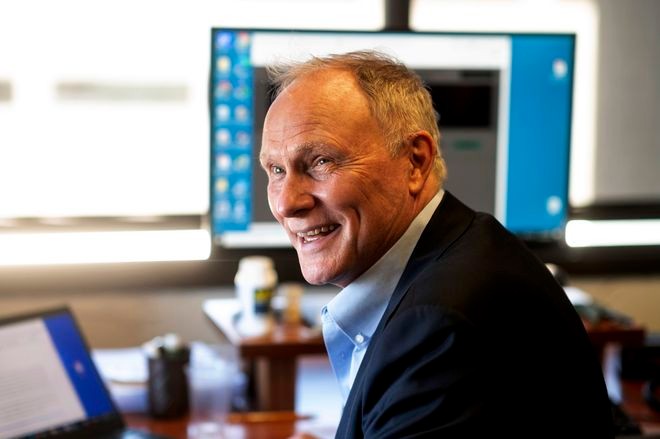 David Card, winner of the 2021 Nobel Memorial Prize in Economic Sciences, sits in his office in Berkeley, Calif., on Oct. 11. Card, a professor at the University of California, Berkeley, received the award for his research on minimum wages and immigration. (AP Photo)

During the Great Depression, U.S. President Franklin D. Roosevelt (1882-1945) noted that America's unemployed masses were confronted with the ruthless problem of how to survive and that just as many others were suffering because of their low incomes.

To combat the crisis, Roosevelt launched his New Deal programs after taking office in 1933.

He created jobs by promoting public works such as dam construction. To raise incomes, he mandated a federal minimum wage, which led to a 30-percent growth in per-hour revenues in the manufacturing industry, according to the book "Saitei Chingin-sei" (Minimum wage system) by economist Takeshi Fujimoto (1912-2002).

Minimum wages were introduced in the United States and European nations in the early 20th century. But for years, they faced relentless criticism from economists who held that higher minimum wages would make businesses lose their incentive to hire workers, thereby shrinking the job market itself.

But David Card, a Canadian-born labor economist and a co-recipient of this year's Nobel Memorial Prize in Economic Sciences, challenged that argument.

In the 1990s, he studied fast food chain outlets in two American states and concluded that a higher minimum wage did not necessarily lead to decreased hiring.

His findings were initially dismissed out of hand and he even came under suspicion of fudging the numbers, he told the British Broadcasting Corp. (BBC).

Gradually, however, many other researchers followed in Card's footsteps, serving to soften long-held criticism against the minimum wage.

With some U.S. states raising the minimum wage to $15 (1,700 yen) an hour in recent years, a move is afoot to improve the lot of low-end workers.

Japan, too, has recently introduced a series of minimum wage hikes, albeit not to the U.S. level yet.

The 2021 Nobel prizes cast light on three ongoing crises: the Peace Prize on endangered freedom of the press; the Physics Prize on climate change; and the Memorial Prize in Economic Sciences on income disparities.