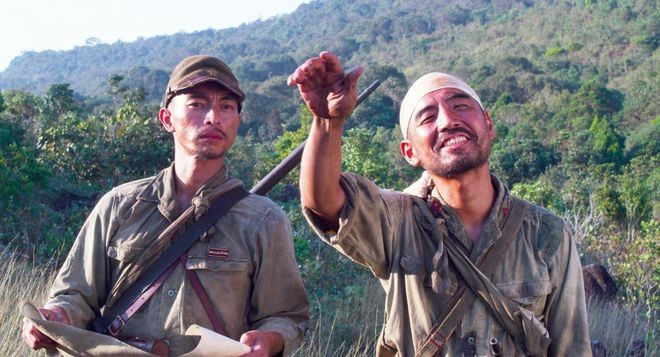 Director Arthur Harari has taken “bold steps” by going beyond the theme of “loyalty” in his film about Hiroo Onoda, the Japanese soldier who surrendered nearly 30 years after Japan’s defeat in World War II.

Harari, 40, an up-and-coming French filmmaker, said he was captivated by the issue after his father told him about Onoda.

The director said he wanted his film, “Onoda--10,000 Nights in the Jungle,” to tell a universal story that gets to the heart of humanity and crosses borders and cultures.

Onoda, a second lieutenant in the Imperial Japanese Army, was deployed to the Philippines in 1944. But he refused to believe that Japan was defeated and hid in the jungles on Lubang island until 1974, when he finally returned home.

Although he was praised for his loyalty to his country, only a few fictional TV dramas inspired by his story have been produced in Japan.

According to Harari, Onoda’s return to Japan was reported in France, but he remained relatively unknown there.

“I well understand what Hiroo meant by ‘We should never start war,’ as well as how important it is to live and how precious peace is,” said Norio Onoda, 71, a relative of the long-time holdout, after watching the film. “Although some parts are different from actual events, I felt like the film unraveled how he stubbornly followed orders and tried to survive.”

In preparing the film, Harari consulted Bernard Cendron, who wrote a book about Onoda published in France when the former soldier returned to Japan.

Cendron had interviewed Onoda, those around him and Filipino locals.

The director said he initially thought that showing his empathy for Onoda would be important in the film. But as he was writing the screenplay, Harari thought that he should dig deeper into ethical and moral issues.

He decided to focus on Onoda’s complicated inner workings and also portray his violence against the islanders.

Harari said he wanted to have viewers alienate themselves from Onoda instead of encouraging them to identify with the character and follow the story only from his point of view.

Yuya Endo, Kanji Tsuda and many other Japanese actors are cast in the film, which was shot in the jungles of Cambodia. It opened the Un Certain Regard section of the Cannes International Film Festival in July.

For Endo, 34, who played the young Onoda, the war was a thing from the distant past that is mentioned in textbooks. He read related books to understand why Onoda stayed in the jungle for so many years.

“I assumed that he had the strength to believe, like he was fascinated by his superior officer’s words that he was special, and it served as a driving force for him to stay on the island,” Endo said. “I cherished the idea when I played the character.”

Harari said the film happened to synchronize with a modern trend.

He said Onoda became radicalized and isolated while he was immersed in his own thoughts, resulting in a situation similar to the current world where conspiracy theories and fake news are generated by fears and imaginations inspired by the unseen.

“Onoda” was jointly produced by France, Japan, Germany, Belgium and Italy, with Filipino actors also cast in the film.

Hitoshi Nagai, a professor at Hiroshima City University who specializes in modern Japanese history, said the film presents Onoda as a regular person who feels conflicted and isolated in his relationship with other soldiers, as opposed to previous portrayals showing him as a strong-willed second lieutenant.

Nagai, who has studied the experiences of Japanese soldiers who remained in the Philippines after the war, described “Onoda” as a work of fiction that contains many scenes that differ from historical facts.

He added that the film could have been given more depth if it paid more attention to the standpoints and feelings of the Filipinos on the island.

But Nagai praised the film.

“The director could take bold steps for some aspects of the film because he is a French filmmaker, a third-party,” the professor said. “A joint international project like this has the potential to re-examine the history from a global point of view.”