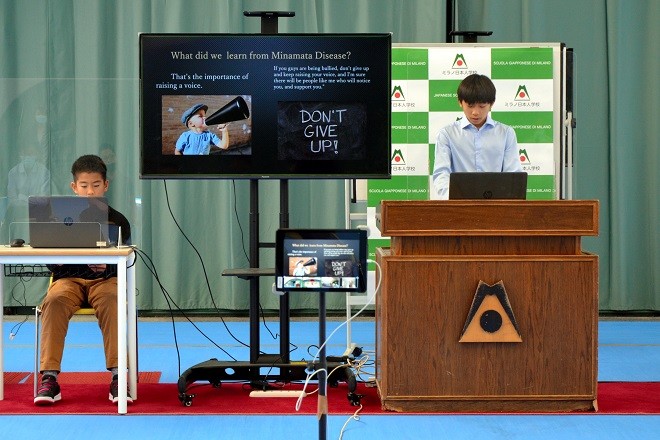 The Johnny Depp film "Minamata,” rather than a Japanese source, motivated Japanese students at a school in Milan to want to study Minamata disease, one of the worst ecological disasters to have befallen Japan.

Still, before committing to the subject, the students in the junior high school division of the Japanese School of Milan found themselves torn over whether it was acceptable for Japanese citizens like themselves to be relying on a film made by people from outside Japan.

Chiaki Nagano, who teaches English to Japanese students at the Japanese School of Milan, found the film made a strong connection with them.

“I want to make the world a better place to live in while our generation is here,” one boy in Nagano's class wrote in a report after watching the movie.

“That’s when I saw a seed sprouting toward the future,” the 43-year-old teacher said.

Students in the school's junior high school division gave English presentations in pairs on what they had learned about Minamata disease at an online side event of the 26th session of the Conference of the Parties (COP26) to the U.N. Framework Convention on Climate Change on Sept. 30.

The students prepared for the presentations by gathering information about the environmental contamination in Minamata, in which both a private business and public administrative bodies were entangled.

In addition to Depp's film, the students of the Japanese school in the north Italian city watched footage of a news conference held during the 2020 Berlin International Film Festival, where the film debuted, and received lessons from an Italian researcher who is well-versed in Minamata disease.

They also conducted an online interview with Toshio Yoshinaga, a 70-year-old resident of Minamata. The longtime activist engaged in raising awareness on the disease and is director of a group called “Association for passing down accounts of Minamata disease.”

Twelve junior high schoolers at the Japanese school and students at a French school participated in the event.

Toranosuke Fujita, 13, and Hiyori Shiba, 12, in their presentation, recounted how patients and their family members won the first Minamata disease lawsuit (1969-1973), in which victims demanded damages from Chisso Corp., the chemical company responsible for the pollution, and later signed a compensation agreement with Chisso.

Toranosuke and Hiyori attributed the legal victory to the courage of the patients and their families who spoke out. They added that they wished to become people who, like Yoshinaga and Depp, have the courage and compassion to speak out and take action.

Ayame Furukawa, 14, and Kanto Oshima, 12, spoke about their impressions from reading “Minamata: Umi no Koe” (Minamata: voice of the sea), a picture book by author Michiko Ishimure (1927-2018).

If people had taken notice and acted earlier, there would have been fewer victims of Minamata disease, they said, and stressed the importance of listening to the opinions of people who have been marginalized.

Evidence of the disease had already appeared in nature, with animals reacting to the pollution, they also noted.