A house in Kofu burned to the ground in a suspected arson on Oct. 12 and the remains of two people were found at the scene. (Masahiko Endo and Ari Hirayama; Video provided by neighbors) 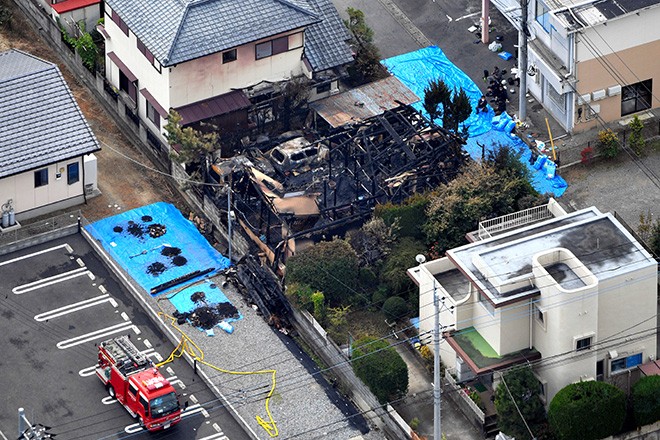 A house that burned to the ground in Kofu in the early morning hours of Oct. 12 is seen from above later that day. (Reina Kitamura)

KOFU--Yamanashi prefectural police arrested a 19-year-old man in the early morning of Oct. 13 on suspicion of assaulting a girl in her home here shortly before the house burned down in a suspected arson.

Two bodies were found at the scene and are presumed to be the girl’s parents, police said.

The man, who lives in the city, turned himself in to a police station in Yamanashi Prefecture late on the night of Oct. 12.

When police questioned him, the man admitted to attacking her, police said.

“That’s absolutely true,” he was quoted as saying by police.

The police said he hinted that he committed arson as well, and they plan to investigate further into how the house fire relates to his case.

When he was at the house, owned by Seiji Inoue, the girl’s father, at around 3:45 a.m. on Oct. 12, the man is suspected of having punched the girl in the head, injuring her, according to police.

Security camera footage near the scene led police to suspect he was involved. The man became a suspect after police started to investigate the fire on suspicion of arson on inhabited buildings.

The man suffered burns to his face and injuries to his fingers.

When the daughter was sleeping on the second floor at home, she heard people fighting on the first floor, so she went downstairs and bumped into the man, according to investigative sources. When she tried to flee, she was attacked from behind.

She and her elder sister, both teenagers, escaped from the balcony on the second floor. The man had attended the same high school as the older sister, investigative sources said.

“A thief broke into (our house),” the elder sister reported when she called police.

Right after that, the two-story wooden house erupted in flames and then burned to the ground.

Inoue, who is in his 50s, lived there with his wife and their two teenage daughters.

Two dead bodies were found at the scene in the burned down house.

The police believe that those bodies are likely Inoue and his wife because they have been unable to contact the couple since the fire. They are trying to confirm the identities of the bodies and will perform autopsies to determine the cause of death.

The house was located in a quiet residential area about three kilometers southeast of JR Kofu Station.