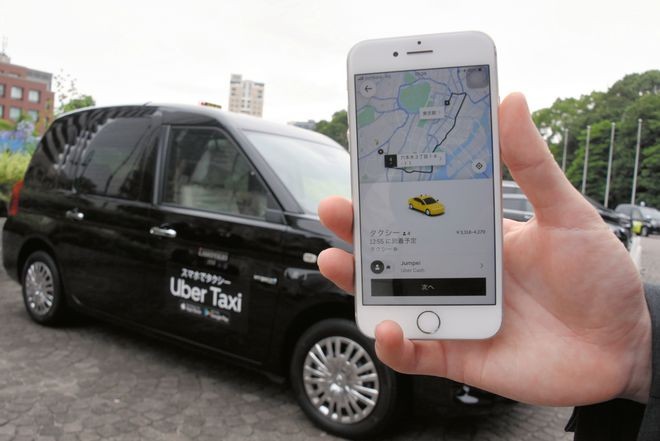 The screen of the cab distribution app Uber is shown in July 2020 in Tokyo. (Asahi Shimbun file photo)

The transport ministry is testing a new system for taxis in Tokyo that adjusts fares based on demand for the services.

The trial, which takes into account the weather, nearby events, dates and times of the pick-ups, started on Oct. 11.

The ministry will determine the possible benefits of the system for consumers and taxi operators as well as balanced rates by mid-December. It plans full operations of an adjustable cab fare system as early as next fiscal year.

The test uses the smartphone apps Go and Uber for taxi distribution and differing fees. Around 9,100 cabs from 17 operators in the Tokyo area are registered on the apps.

Customers are informed of the rates on the apps in advance when they summon taxis.

The fares in the test range from 90 percent to 120 percent of current levels.

The rate increases when demand is higher, such as during morning and evening rush hours or on rainy days. The system will hopefully enable drivers to quickly reach passengers who are especially desperate for a ride.

The lower fares for less-busy times could lead to increased business from people who usually don’t use cabs.

The changeable rate system has been introduced in Europe, the United States, the Middle East and other overseas regions.

The Japanese government’s Regulatory Reform Promotion Council included the system in its proposals made in June.