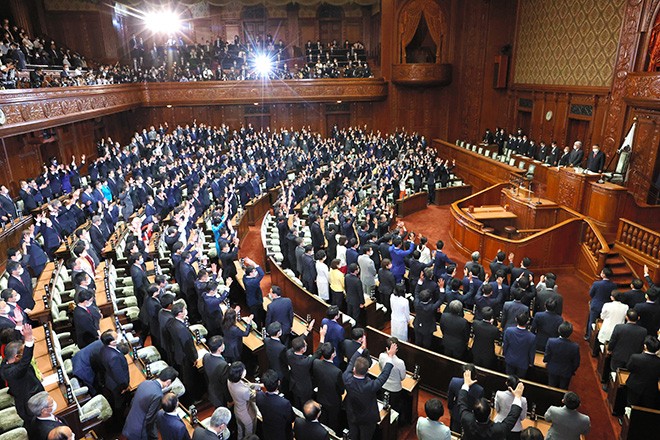 In a long-expected move, the Cabinet of Prime Minister Fumio Kishida approved the dissolution of the Lower House on Oct. 14, paving the way for a general election on Oct. 31.

Campaigning for the Lower House election will officially begin on Oct. 19.

“We will show voters what we are intending to do and what the goals of the government are,” Kishida told reporters on Oct. 14.

Opposition parties were already busy hammering out cooperative efforts in a bid to unseat the ruling Liberal Democratic Party from power.

The Japanese Communist Party announced on Oct. 13 that it would not be running candidates in 22 single-seat districts in which the party had initially considered endorsing a candidate.

The main opposition Constitutional Democratic Party of Japan plans to run candidates in all of those 22 districts.

The JCP decision means the five major opposition parties will back a single candidate in more than 200 of the 289 single-seat districts.

“Rather than just change the cover, the political sector as a whole has to be changed,” CDP leader Yukio Edano told reporters on Oct. 14. “This election will be about changing a politics of covering up and deception.”

The major parties have also already compiled their campaign platforms.

The CDP platform announced on Oct. 13 was clearly intended as a countermeasure against past policies under the LDP.

The platform emphasizes fairness, especially in terms of economic benefits, contending that the Abenomics package of economic measures under Shinzo Abe only helped the affluent.

The CDP said if it takes control of government, it would lead a recovery of the middle class, which makes up almost the entire population, by, for example, temporarily cutting the consumption tax rate from 10 percent to 5 percent.

The party pledged another temporary measure that would impose zero income tax for those making about 10 million yen ($88,000) a year or less.

The CDP is also pushing a measure that Kishida has shied away from—raising tax rates on income from stocks and other financial transactions to levels equivalent to those in other advanced nations.

The opposition party also tried to stake out a difference from the LDP in terms of diversity, calling for early legal revisions to allow married couples to choose separate surnames and legislation guaranteeing equality for LGBT individuals.

The LDP platform announced on Oct. 12 called for heightened security measures to counter moves being made by China and North Korea. One policy plank says defense spending should be doubled to more than 2 percent of gross domestic product.

The emphasis on using military power to counter China’s activities has created an LDP platform even more hawkish than the one pushed by Abe when he was prime minister.

With the security pledges and promises for economic measures to bolster the middle class, the LDP platform makes no mention of seeking fiscal discipline.

The Lower House election will be the first held after the four-year terms of Lower House members end on Oct. 21.

Kishida’s dissolution came 10 days after he was formally voted in as prime minister, the shortest period in the postwar era.

If the LDP fails to gain a majority in the Lower House election and Kishida is forced to step down, he would be given the dubious honor of having the shortest tenure as prime minister.