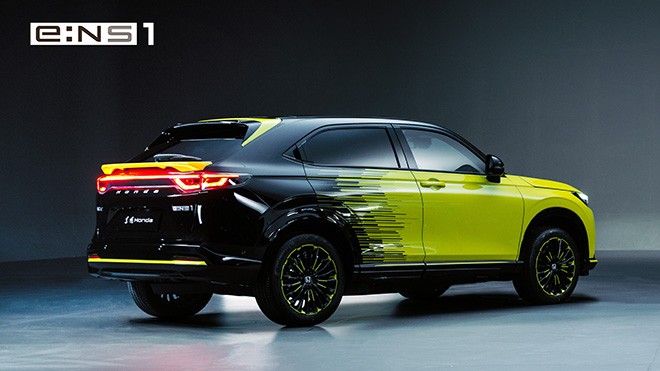 Honda will market the electric vehicle “e:NS1” in the spring of 2022, manufactured by the local joint company Dongfeng Honda Automobile Co. (Provided by Honda Motor Co.)

Honda Motor Co. announced on Oct. 13 that it will no longer sell new models of cars that run on gasoline in China after 2030 as it looks to expand its foothold there.

The major auto manufacturer said it will only sell electric, fuel cell and hybrid vehicles.

Honda said it will respond to China’s future regulations five years in advance and promote the company's aggressive carbon-free policies.

Honda will sell new models there in spring 2022, which will become the first electric vehicles in China among its brands. It will also build two new electric-vehicle factories with an aim of starting operations in 2024. It is considering exporting these types of cars from China as well.

Honda will begin sales of two new models of SUVs under its “e:N” series in spring 2022.

It plans to market a total of 10 kinds of electric vehicle models over five years.

In major cities in China, the company will develop its EV shops and boost the number of dealers.

Honda announced in April that by 2040 all its global sales of new cars will only be electric and fuel cell vehicles, which do not emit carbon dioxide.

It expects its sales ratio in China in 2030 will be about 40 percent for electric and fuel cell vehicles and 60 percent for hybrids. It plans to stop selling hybrids before 2040.

Toyota Motor Corp. will sell new models under a brand exclusively made up of electric vehicles in 2022 and ensure all its models go electric by 2035.

Nissan Motor Co. also plans to transition into selling new models of electric vehicles in the early 2030s in major markets, including China.