AUTHORS ALIVE!: Murakami adds voice to his work in reading with Yoko Ogawa 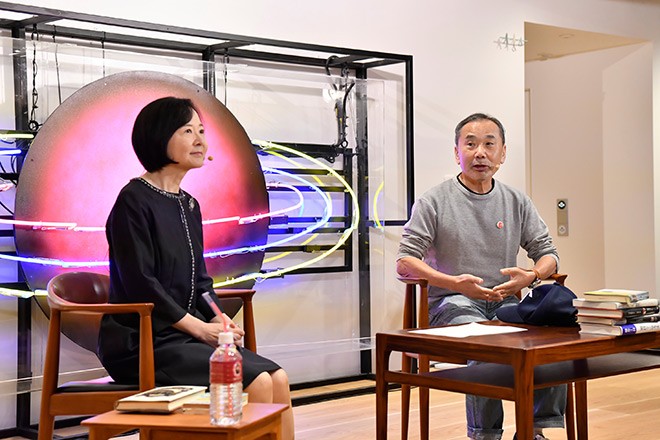 Yoko Ogawa, left, talks with Haruki Murakami during an event on Oct. 9 at the Waseda International House of Literature in Tokyo. Behind them is an artistic stage setting used in a theatrical adaptation of “Kafka on the Shore,” a novel by Murakami. (Provided by Waseda University)

Editor’s Note: This article is part of a series on “Authors Alive!” book-reading and other events to mark the opening of the Waseda International House of Literature known as the Haruki Murakami Library.

In a captivating session where two of Japan’s most renowned authors read from their books, Haruki Murakami and Yoko Ogawa showed off their mastery of the power of the spoken word.

The writers displayed contrasting reading styles at the event held on Oct. 9 at the newly opened Waseda International House of Literature in Tokyo, popularly known as the Haruki Murakami Library.

Ogawa fixed her eyes down on pages while she read aloud in even tones. Murakami cast frequent glances at the audience as he recited his works as if talking to them.

In addition, the two exchanged views on fiction writing and other subjects.

The event was the first in a series of public reading sessions titled “Authors Alive!” to mark the opening of the facility, which houses books by Murakami as well as documents and materials related to the author.

The library, which opened on the main campus of Waseda University in Tokyo’s Shinjuku Ward on Oct. 1, is expected to serve as a base of literary studies and as a cradle of new cultural and creative experiences.

The session was attended by fewer than 20 people, including Waseda University students, because admission was limited due to the novel coronavirus pandemic.

In the reading portion, Ogawa read “Backstroke,” one of her early short stories, and a passage from “Kobako” (Little boxes), her recent novel.

Murakami recited “The Rise and Fall of Sharpie Cakes,” an early short story, and “Landscape with Flatiron,” a short story inspired by the Great Hanshin Earthquake, which ravaged the city of Kobe and its surroundings in 1995.

A man who speaks in the Kansai dialect of western Japan and goes by the family name of Miyake appears in “Landscape with Flatiron.”

“Let me explain why I picked this book,” Murakami told the audience. “Many people have said they want to hear me speak in the Kansai accent, so I decided to present something full of the Kansai dialect.”

Murakami, who grew up in the Kansai region until he finished high school, showed off his full command of the local dialect, to no one’s surprise.

The story is set in a seaside town in Ibaraki Prefecture. Junko, a woman who came to the town after running away from her home in May in her third year of high school, meets Miyake, a man with the Kansai accent, who collects driftwood and makes bonfires by the seashore.

“I wanted to write stories about the earthquake without, as a self-imposed restraint, saying a single word about Kobe and without portraying a single scene of the quake,” Murakami said, recalling the time he was writing the work.

“The story is just about making a bonfire, but many things are hidden and are being burned in that bonfire,” Ogawa said. “Nothing is said about Miyake’s family or about Junko’s relationship with her father, but everything ends up embraced in the bonfire.”

The two authors also took questions from the audience.

“How much does life experience matter to you when you write fiction?” a participant asked.

“That depends on who you are,” Murakami answered. “As for me, I couldn’t have written things if it had not been for the decade of my 20s.”

Murakami added: “I believe that imagination is born of memories that overlap and intertwine. But it’s not just about how much experience you have lived through. You can never write things unless you know how to intertwine pieces of your experience adeptly.”

Ogawa said, “It’s probably like some already have what you would call a ‘literary circuit’ at the age of 18, while others never get around to having one, no matter how old they are.”

The session was held in an impressive space, reminiscent of a tunnel or a cavern, just inside the entrance to the library building.

Speaking on his philosophy on fiction writing during a past interview, Murakami likened himself to a “bard of the troglodytic age.” He said to him, his readers are like those who sit with him in a cavern by the side of a bonfire and listen to whatever story he tells.

The event closed with warm applause resounding in the venue, which literally embodied that allegory.

The “Authors Alive!” series will comprise six sessions. Details are available on a Japanese-language website at (https://www.waseda.jp/culture/wihl/).

The exterior of the Haruki Murakami Library, officially named the Waseda International House of Literature, features decorative eaves that resemble a flowing belt.

A grand staircase leading to the basement level is flanked on both sides by walls of bookshelves, which serve as a symbol for the facility.

The basement level houses a replica of Murakami’s study. Also on exhibit is a grand piano that sat in a jazz bar that Murakami opened while he was a Waseda University student. The basement contains a cafe operated by students.

Murakami’s books, donated by the writer, as well as translations of his works published around the world are shown on the ground floor. The ground floor also houses an audio room, where part of Murakami’s collection of vinyl records is on display.

Occupying the third through fifth floors is a research facility, closed to the public, where 600 or so scrapbooks’ worth of documents on Murakami, such as magazine articles and reviews, and other materials await scholarly scrutiny.

The library’s books cannot be loaned out but can be read in a lounge space on the ground floor and elsewhere in the building.

(This article was written by Yuhei Kyono.)