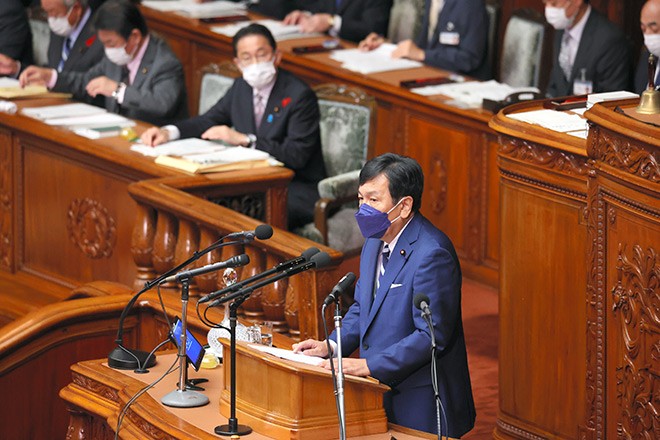 The word “distribution” was heard frequently during the Diet session that just ended. I wonder why this plain word has a somewhat unfamiliar ring to it.

The word that has been traditionally used in association with an economic policy is “redistribution,” not “distribution.”

“Distribution” denotes a simple act of allocation or handing something out. “Redistribution,” on the other hand, refers to a policy designed to shift income from the affluent to the less affluent.

He has already frozen plans to review taxes on income from financial transactions, which he advocated for during the Liberal Democratic Party presidential campaign.

It is as if Kishida has declared to well-heeled voters that he will not be relying on their money.

He said he will “distribute” wealth by encouraging businesses to raise wages, but whether that will work is anyone’s guess.

The main opposition Constitutional Democratic Party of Japan prefers to use “redistribution.” The party said it plans to strengthen progressive taxation, which imposes a heavier tax burden on higher-income earners.

However, the CDP said it will immediately act on its pledge to temporarily forgo taxation on annual personal incomes of 10 million yen ($87,800) or less if it comes into power.

In other words, the plan is to “distribute” first and “redistribute” later.

Both the ruling and opposition parties should explain in greater detail where the funding will come from if they do not want to be criticized for irresponsible vote-buying.

I would not mind if politicians call for issuing deficit-covering bonds, but I would mind if they have no qualms about resorting to such emergency measures.

What is the reason for the urgency to get into debt? If they believe bond financing is necessary for the betterment of society, what is the ideal society they envision?

The issue boils down to whether political parties can explain themselves to our satisfaction.

The Lower House was dissolved on Oct. 14 and election day is only 17 days away.

Given this unprecedentedly tight schedule, we need to remain focused to determine, from the way each party’s politicians speak, where their policies differ.