EDITORIAL: Voters can send clear message on how to bring democracy to life 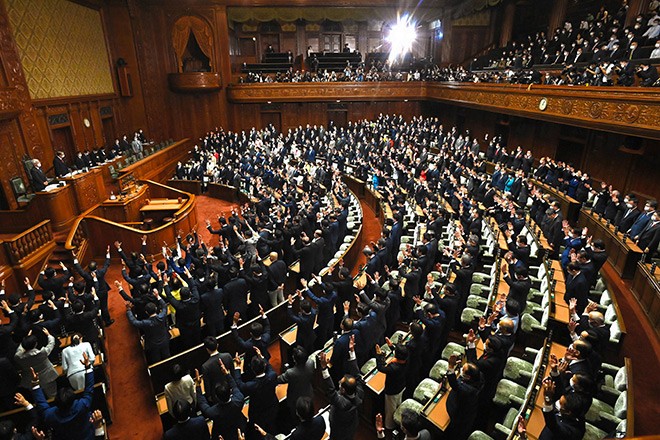 Lawmakers shout “banzai” cheers on Oct. 14 after the Lower House is dissolved. (The Asahi Shimbun)

The period between dissolution of the chamber and voting day, Oct. 31, is unusually short at 17 days.

The election first and foremost needs to be about dissecting the serious damage inflicted on Japan’s democratic principles by the administrations of Shinzo Abe and Yoshihide Suga, Kishida’s two predecessors, and exploring the ways to restore credibility in the political system.

It should also focus on offering remedies for pressing issues, such as the aging of the population as birthrates continue to drop and fashioning a vision for the post-pandemic era as well as a long-term future of the nation.

The ruling and opposition parties need to offer clear options so voters can best judge which side deserves a mandate to govern.

LIMITS OF QUASI-CHANGE OF POWER

The process of leading to this moment has been full of unusual developments.

Suga, who lost the public’s trust with his poor response to the novel coronavirus pandemic, announced his resignation just six weeks prior to the end of the four-year term for Lower House members.

As most LDP factions opted to effectively allow members to vote as they wished, none of the four contenders emerged as a clear frontrunner. Kishida was elected as new LDP president through a runoff.

The LDP picked a politician who cast himself as a moderate ready to listen to critics and offer careful explanations. Kishida took the helm amid mounting public criticism about the strong-arm approach to policymaking adopted by the Abe and Suga administrations, which showed a tendency to dismiss views that weren't in sync with their own and paid little heed to the importance of offering explanations concerning issues of the day.

The LDP’s choice of Kishida as its new chief harked back to when the party changed its leader as a “quasi-change of power.”

After Nobusuke Kishi (1896-1987) resigned as prime minister in 1960 over “Anpo Toso,” a wave of fierce protests against a new bilateral security treaty with the United States that caused deep divisions in Japanese society, the LDP picked Hayato Ikeda (1899-1965) to lead the party. Ikeda had focused on economic growth and adopted a slogan of “tolerance and patience.”

By pledging to pursue “new capitalism” and stressing the importance of wealth distribution, Kishida created the impression that he was aiming for a shift not just from the political style of his two predecessors but also from their policy agendas.

But the impression he gave was false if Kishida’s actions after his election as party leader are any indication.

His picks for the party’s new executive lineup and his Cabinet, as well as his policy speech at the Diet and answers to questions about his address from party representatives, suggest he is inclined to carry on the political legacies of his predecessors instead of shifting away from them.

Kishida’s leadership performance so far demonstrates the limits of the LDP, which lost its political diversity during Abe’s long years at the helm.

POSTMORTEM DUE FOR ABE, SUGA POLITICS

Kishida described the Lower House election in an Oct. 14 news conference as the poll to choose the nation’s future.

For sure, the election will be about choosing the nation’s leader for the next four years. But the choice should be based on a rigorous assessment of the ruling coalition’s track record.

It is a matter of regret that the negative legacies of the Abe and Suga administrations were not examined and evaluated during the LDP’s leadership race.

Kishida has shown little interest in getting to the bottom of political scandals that dogged the Abe administration, including those concerning annual tax-funded cherry blossom viewing parties hosted by Abe and two school operators linked directly or indirectly to Abe, Moritomo Gakuen and the Kake Educational Institution.

The scandals generated suspicions that those close to the center of power were awarded special and unfairly favorable treatment. They also cast serious doubt over the fairness and justice of political and administrative decisions and badly damaged the credibility of the nation’s governing system as a whole.

These scandals are the most visible signs of what Kishida refers to as a “crisis of democracy.”

Kishida also ignored calls to appoint six nominees to the Science Council of Japan who were rejected by Suga without good reason.

This is tantamount to endorsing the disregard shown by the Abe and Suga administrations to long-held interpretations of the law by unilaterally making changes without offering a convincing explanation.

The decision on whether to accept an opposition request to hold a Budget Committee session to debate key policy issues in question-and-answer format during the extraordinary Diet session was an acid test of Kishida’s commitment to redressing the tendency of the Abe and Suga governments to disrespect the roles of the Diet and opposition parties.

But he opted to dissolve the Lower House swiftly. The election schedule he set, one week earlier than expected, should be seen as a mere political ploy to serve the party’s interest by seeking a public mandate before his leadership qualities can be rigorously scrutinized by the public.

Kishida’s policy programs increasingly resemble those of Abe and Suga.

He has already started backpedaling on his promise to review taxation on income from financial investment, made during the LDP presidential race as a key element of his policy efforts to promote wealth distribution.

His foreign and security policies and his position on proposed amendments to the Constitution are more or less in line with Abe’s policies.

The Constitutional Democratic Party of Japan (CDP), the main opposition force, has compiled a campaign platform aimed at differentiating its policy agenda from that of the LDP.

It promises an early revision to the law to allow married couples to use separate surnames and measures to rectify economic disparities, including higher taxation on capital gains, as well as efforts to get to the bottom of the Moritomo, Kake and cherry-blossom party scandals.

For some time, Japan’s fragmented opposition has been dismissed as a weak, marginalized political force that is no match for the powerful ruling coalition.

The Lower House election will be a crucial test for the opposition parties that were powerless in stopping the high-handed actions of the two previous administrations.

Just before the previous Lower House poll four years ago, the Democratic Party (Minshinto), the largest opposition at that time, split into the CDP and “Kibo no To” (Party of Hope). This worked to the LDP's advantage with multiple opposition candidates competing in single-seat constituencies.

This time, four opposition parties--the CDP, the Japanese Communist Party, the Social Democratic Party and Reiwa Shinsengumi--have agreed on a set of policy proposals forwarded by a citizen advocacy group called the Civil Alliance for Peace and Constitutionalism.

The four groups and the Democratic Party for the People are expected to field unified candidates in more than 200 of the 289 single-seat constituencies across the nation.

The JCP, the SDP and Reiwa supported Yukio Edano, the CDP leader, in the Lower House vote to elect a new prime minister on Oct. 4.

The clearly defined opposition alliance has ensured that voters will have a clear choice between the candidate of the ruling coalition of the LDP and its junior partner, Komeito, and the candidate backed by the opposition camp in many constituencies.

But the common opposition policy platform includes proposals that are vague or not based on specific plans to realize them.

There is also a disagreement between the CDP and the DPP over the wisdom of joining hands with the JCP.

This short political battle will test the opposition alliance’s ability to win the hearts and minds of voters and to produce visible results.