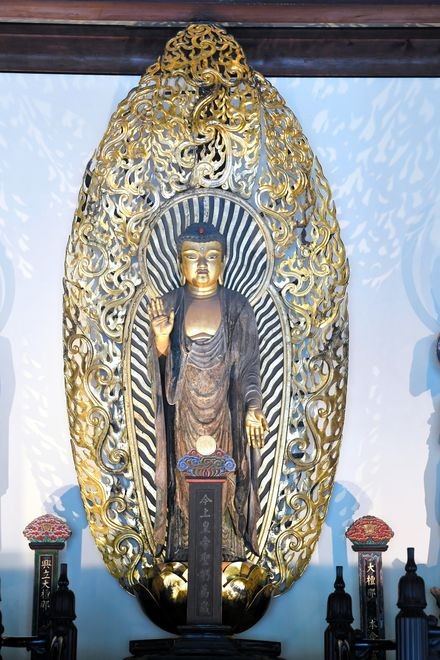 A standing statue of Shaka Nyorai enshrined at Tofukuji temple's Hatto hall in Kyoto's Higashiyama Ward. The structure is designated as an important cultural property by the central government. (Asahi Shimbun file photo)

KYOTO--Cultural treasures rarely accessible to the public are part of a special exhibition now being held at 12 locations in this ancient capital.

Hosted primarily by the Kyoto Heritage Preservation Association with The Asahi Shimbun serving as a special sponsor, the event runs until December. Each venue is setting its own viewing schedule.

At Tofukuji temple in the city's Higashiyama Ward, the Sanmon gate and Hatto hall, both designated as national treasures by the central government, will be open to the public from Oct. 18 to Dec. 5.

A standing statue of Shaka Nyorai, as well as standing statues of Buddhist saints Kasho and Anan, are enshrined in the Hatto hall. They all date from the Kamakura Period (1185-1333) and are designated as important cultural properties by the government.

Standing at least 2.6 meters, the Shaka Nyorai bears all the hallmarks of China's Song dynasty influence, notably in its long nails and other aspects. It is said the statue was relocated from another temple when the Hatto hall was rebuilt following a fire that destroyed the Butsuden hall during the Meiji Era (1868-1912).

Admission to each location in principle will cost 1,000 yen ($8.80) for adults and 500 yen for junior and senior high school students. However, there may be some differences in admission fees among locations.

Revenue from the exhibition will be put toward repairing and preserving cultural properties.

Schedules are subject to change.

For details, visit the association's official website at (http://www.kobunka.com/tokubetsu/index.html).