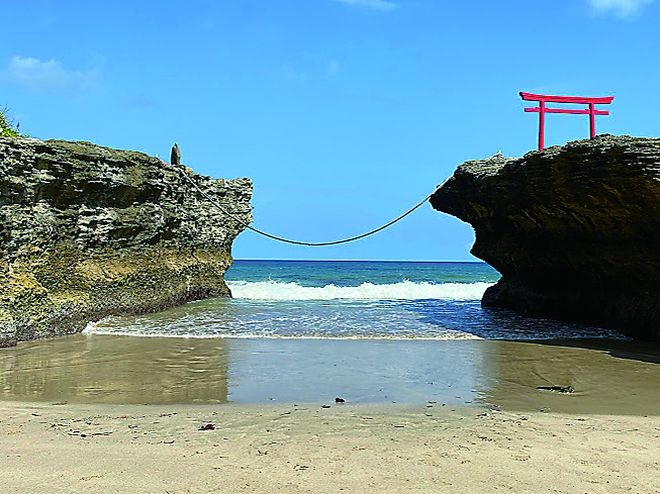 The torii gate of Shirahamajinja shrine sits atop a rock on the beach as waves crash around the rock on the Izu Peninsula. (Photo by Lisa Vogt)

What a gorgeous red torii gate at the edge of the ocean cliff, I thought, as I walked toward it, my toes savoring and gripping the feel-good sand on Shirahama Ohama beach in Shizuoka Prefecture.

I’m a mountain gal, and my connection to the ocean is usually limited to what I find on a dinner plate, but I felt something here. I stood beneath the torii and peered at the clear water and the Izu islands ahead.

Suddenly, I heard a deep thud, like someone had pounded a huge Japanese drum, and with it, the earth under my feet and the world around me shook. Puzzled, I looked behind, around, below at the ocean, and above.

I was alone. Just as I thought maybe it was my imagination, again, a huge something, a vibration, hit me. Was it some message?

The torii belongs to Ikona-hime-no-Mikotojinja shrine, commonly known as Shirahamajinja, the oldest Shinto shrine in Izu.

Legend has it that the great god Mishima Daimyojin traveled on the Kuroshio Black Current from the south and landed here 2,400 years ago. He thought the place beautiful, married the "mikoto" (local goddess) and settled here. Well, OK. Every shrine has its story. I wondered why, though, this place would be where it all began.

The Izu Peninsula is the only landmass in the country that sits on the Philippine Sea plate, which drifted north and collided with two more plates: the Amurian and Okhotsk plates. At the triple junction rises Mount Fuji.

Could some ancient memory be imprinted within the DNA of this place? From the south, first the landmass came, then gods, and later William Adams (aka Miura Anjin), an English navigator sent here in 1604 to build Western-style ships.

Maybe it’s a stretch to link all these things, but it’s a special place indeed where entities from yonder arrived.

On the shrine grounds is an ancient and sacred juniper tree revered and known as the White Dragon, so named for its shape. To individuals in tune with the “ether realms,” you’ll likely feel a special something spiritual here.

I learned that the mystic vibration that I felt under the torii gate came from waves crashing into a cave that lies underneath it.

The ocean conditions have to line up perfectly in order to experience it, and the spot has become my Ouija board--I go there when I have a query, and if I feel the thump, I know that the force is with me, and it’s a sign to proceed.

This article by Lisa Vogt, a Washington-born and Tokyo-based photographer, originally appeared in the Oct. 3 issue of Asahi Weekly. It is part of the series "Lisa’s Wanderings Around Japan," which depicts various places across the country through the perspective of the author, a professor at Meiji University.