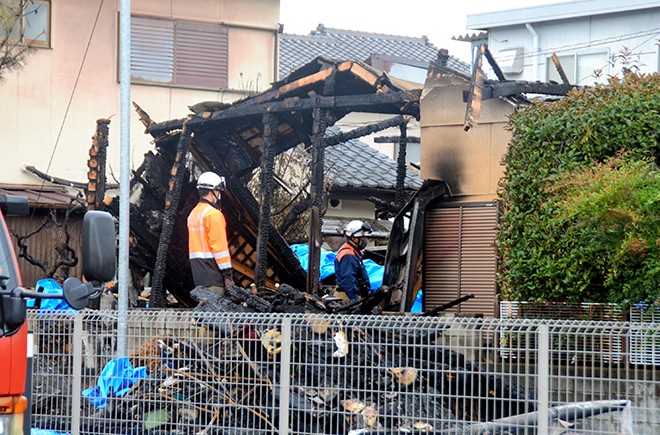 Firefighters at the scene of a suspected arson attack in Kofu on Oct. 13, a day after the incident (Yuji Masuyama)

KOFU--Autopsies on two victims of a crime scene initially suspected to be a case of arson showed they had been stabbed and bled to death, police said.

The bodies believed to be those of Seiji Inoue and his wife were found at their home here after it was gutted by fire in the early hours of Oct. 12.

A 19-year-old male arrested on suspicion of assaulting the couple's second daughter was referred to the Kofu District Public Prosecutors Office on Oct. 14 by Yamanashi prefectural police.

Police investigating the case as one of alleged murder and arson said the suspect apparently injured the girl by punching her in the head at Inoue’s home around 3:45 a.m. on Oct. 12, shortly before the fire broke out.

The suspect attended the same high school as the couple’s eldest daughter and apparently harbored an emotional attachment for the girl, according to investigative sources, citing police interviews with those who know him.

The suspect had found he was unable to contact her via the Line messaging app, which police believe angered him, the sources said.

The couple’s second daughter was in bed on the second floor in the early hours of Oct. 12 when she heard a commotion on the first floor, according to the sources.

She went downstairs to investigate and bumped into the man, who then attacked from behind when she tried to flee.

The two girls, both teenagers, escaped from the balcony on the second floor.

“A thief broke into (our house),” the elder sister told police when she called to report the intrusion.

Immediately after that, the two-story wooden-framed house went up in flames, destroying the building.

The suspect admitted he attacked the younger daughter and hinted he set fire to the house while Inoue and his wife were inside, according to police.

The Inoues had never complained of harassment, threats or assault by the suspect or third parties, police added.

Police concluded the bodies were likely those of Inoue and his wife because they remained unaccounted for after the blaze. Final confirmation of their identities will be made through DNA analysis, police said.