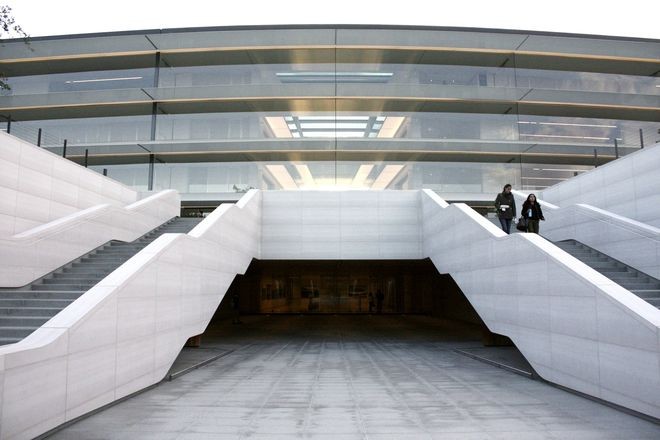 A view of the headquarters of Apple Inc. in Cupertino, U.S.A., in September 2018 (Asahi Shimbun file photo)

SEOUL--Apple Inc. was on a collision course with South Korea on Friday over new requirements that it stop forcing app developers to use its payment systems, with a government official warning of a possible investigation into the iPhone maker’s compliance.

The development comes after South Korea amended the Telecommunication Business Act in August to try to curb the tech majors’ market dominance and stop the big app store operators such as Apple and Alphabet Inc’s Google from charging commissions on in-app purchases.

The law went into effect last month but Apple had told the South Korean government that it was already complying and did not need to change its app store policy, a Korea Communications Commission (KCC) official in charge of the matter told Reuters.

“This goes against the purpose of the amended law,” the official said, requesting anonymity as the KCC was still in talks with Apple on compliance.

The regulator would ask Apple’s South Korean unit for a new company policy giving greater autonomy in payment methods, and if Apple failed to comply, would consider measures such as a fact-finding probe as a precursor to possible fines or other penalties.

Apple did not immediately reply to a request for comment.

Google had informed the KCC that it planned to comply with the law, including allowing third-party payment systems, and would discuss the matter with the regulator starting next week, the KCC official said.

Google did not immediately reply to a Reuters’ request for comment.

Jung Jong-chae, a lawyer specializing in antitrust matters, said Apple had more to lose than Google from the Korean regulation.

“Differences between Apple and Google in willingness to give ground may be because Apple controls everything from hardware to operating system (OS) to app market to payment system,” he told Reuters.

“And (Apple) has more to lose if its dominance breaks on any front, which could lead to calls for openness on other fronts.”