Media representatives are given a tour of the Nagasaki City Dinosaur Museum ahead of its opening on Oct. 29. (Shoma Fujiwaki) 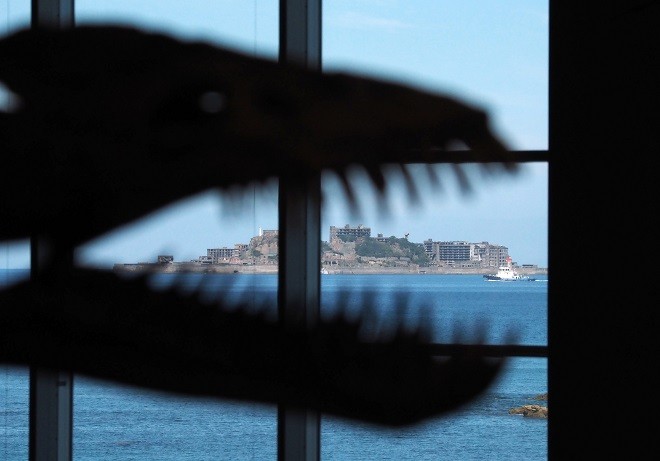 A plesiosaur Thalassomedon that hangs from the ceiling of the Nagasaki City Dinosaur Museum looks ready to gobble up Hashima island, aka Gunkanjima (Battleship Island), when viewed from the balcony seats. (Shoma Fujiwaki)

NAGASAKI--The Nagasaki City Dinosaur Museum situated in an area rich in dinosaur fossils will literally open with a roar on Oct. 29.

Its exhibits include a complete skeletal replica of a carnivorous tyrannosaurus and a robot that not only replicates the movements of a T-Rex but also gives off a loud bellow with movements that suggest it is on the hunt for prey.

The museum is located in the city's southern seaside district of Nomozaki where fossils of a large tyrannosaurid have been found and overlooks Hashima island, a UNESCO World Heritage site also known as Gunkanjima (Battleship Island).

The 180 or so exhibits include a 13-meter-long replica T-Rex skeleton. In addition, a T-Rex robot standing 5.7 meters tall gives out a roar-like bellow while moving its eyes and upper body.

Fossil teeth of a large tyrannosaurid were excavated for the first time in Japan in Mitsuse-so stratum from the late Cretaceous Period in a coastal area west of the city in 2015, according to city officials.

They also said that a fossil from an ornithopod Hadrosauroidea dinosaur, one of the largest found in Japan, was unearthed in the same stratum this past July.

The museum also serves as a research facility as it has a CT scanner and special equipment to remove caked mud and dirt from fossils.

To prevent the spread of the novel coronavirus, reservations must be made through the official website at (https://nd-museum.jp/).

Visitor numbers will be limited to 280 per hour.