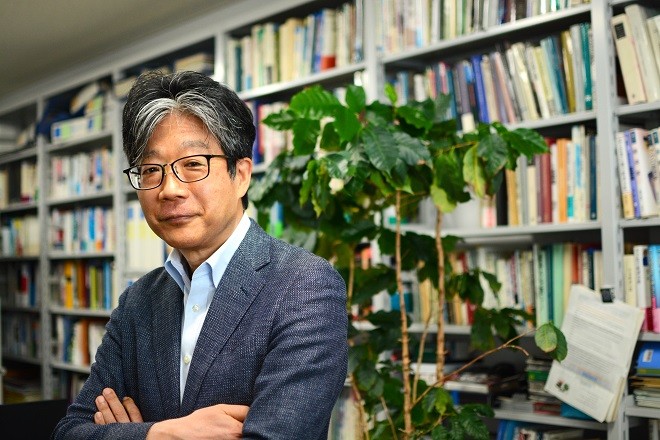 Tsutomu Watanabe, an economics professor at the University of Tokyo, says the former administration of Yoshihide Suga failed to communicate to the public how they should take a more forward-looking attitude. (Takashi Ebuchi)

Prices that have often been called the “thermometer of an economy” remain unchanged in Japan and while many economists have sought to explain that trend, no correct answer has yet been found.

Tsutomu Watanabe, an economics professor at the University of Tokyo, considered one of the foremost scholars on prices, believes the main culprit is the psychology of the Japanese public that does not allow for even a tiny increase in prices.

He was asked what has to be done to get the Japanese economy, which has remained stagnant for about two decades, moving again.

Question: Why is it that prices in Japan have remained unchanged for so long?

Watanabe: For example, prices of daily services, such as at the beauty parlor and dry cleaning, have remained almost unchanged since about 2000. That is because of the feeling at the base of many consumers that, “I do not want to pay even 1 yen extra.”

When companies face higher prices for their raw materials or find import costs increasing because of a weaker yen, they would normally want to pass the additional costs onto the price of their products.

However, in surveys of consumers, there is a prevalent trend of respondents saying they would go to other businesses if the price offered at the business they normally frequent for products they often buy goes up even a little.

When the same question is asked of consumers in the major Western nations, a majority of respondents say they would continue to shop at the same business. In Japan, companies are forced to keep the price at the same level because of their fear that customers will move away.

Q: How did that psychology of not accepting price increases emerge?

Watanabe: Until about 1995, it was normal in Japan for product prices to increase by about 3 percent annually. However, after consumption was severely dampened from the late 1990s when the financial crisis occurred, companies began keeping their prices unchanged. The same thing occurred with the salaries of workers, which remained almost unchanged.

The problem is what happened thereafter. Even while the economy was recovering after the bad debt problem of banks had been cleared up, companies continued to keep price levels unchanged.

Q: Why did that occur?

Watanabe: Due to the considerable recovery of the economy, the Bank of Japan in 2006 ended its zero-interest rate policy. Looking back on that time now, that was an opportunity to move out of a structure of always keeping prices the same, but neither the government nor the BOJ did anything to artificially raise prices.

The fear of a deflationary spiral had disappeared. And it can be said that prices are stable if they remain the same at all times. The problem was neglected because of the careless view that the situation was all right.

While the BOJ continued to say formally that prices had to rise, I believe its true intent was that there was no need to take such action. In the meantime, the belief became stuck in the minds of consumers that “the price at the barbershop is always the same.”

After 2012, strong messages were issued by the Shinzo Abe administration through its Abenomics package of economic measures and BOJ Governor Haruhiko Kuroda’s call for monetary easing of a totally different dimension. But those by themselves were insufficient. And the raising of the consumption tax rate in 2014 from 5 to 8 percent also cut into the momentum for raising prices.

Q: But wasn’t the slow rise in prices a common problem among the advanced nations?

Q: Does that mean that Japanese consumers are exceedingly miserly?

Watanabe: Having been shown for an extremely long period no movement in prices, I believe there are many consumers who feel that is the true picture of prices. One president of a food product company complained that while overseas business partners will accept tacking on higher prices when costs increase, major Japanese distribution companies are never convinced no matter how appropriate the explanation given.

I also feel it is irrational. I feel like asking consumers, “Are you so poor that you cannot accept even a 1-yen increase?” Even among those who earn an average annual salary and should be able to accept such increases, there is a feeling of not wanting such a rise.

Q: But if there is as little movement in salaries as prices, could not that situation be considered one that is in a state of equilibrium?

Watanabe: It is a state of equilibrium, but that is the problem. For example, let us say there is a pizza parlor that makes a capital investment to purchase a new oven to create more delicious pizza. But it has to keep prices the same as rival outlets because consumers would not shop there and that makes it difficult to recover the investment.

Companies must act on the precondition that it will not be able to raise prices at all. They will be forced to cut costs and not be able to raise the salaries of its workers. That means all forward-looking activities, such as product development, capital investment and technological change, will come to a halt. That is the picture of the Japanese economy over the past 20 years.

Q: Didn’t the novel coronavirus pandemic also have a major effect on prices around the world?

Watanabe: During the initial spread of the coronavirus, demand for face-to-face services such as restaurants evaporated and there was a drop in service sector prices in Japan and the West. But while prices increased in the West as the economies recovered, the negative growth in prices in Japan barely managed to get back to zero growth. With prices difficult to increase to begin with, the novel coronavirus left behind another negative legacy to produce a double-layered downward pressure on prices.

Q: In the West, there has been growing interest in revenge spending in which money is spent aggressively on eating out and travel to make up for the long period of being cooped up. What do you feel about that?

Watanabe: There was a time when I held hopes for such results in Japan. When the economy was emerging out of its crisis situation, I felt there might be a chance of moving away from the wrongful state of equilibrium in prices. But even after the Japanese economy moved out of its worst situation and demand was returning, prices have not moved. The reason prices are not increasing is not due to insufficient demand. Even if the economy continued on its recovery course through a wider spread of COVID-19 vaccinations, I believe it will still continue to be difficult to raise prices.

Q: In Japan, labor and management have emphasized maintaining jobs over increasing salaries. Is that not a factor behind the difficulty in raising salaries and prices?

Watanabe: While distortions in the labor market are a problem for the Japanese economy, I still believe that even if salaries did go up that would not mean a simple increase in prices. Prior to the pandemic, there was a period when the wages of irregular workers at “izakaya” Japanese-style pubs did go up.

But most of those izakaya did not pass on the additional personnel costs in their prices. And those that did try to pass on the costs failed in their efforts because they lost customers. It might be different if salaries were doubled, but I feel it is difficult to (raise prices) with just an increase of a few percentage points.

Q: Isn’t a fundamental issue the low productivity of workers?

Watanabe: I also feel productivity in Japan is low and efforts should be made to raise it. But what I want to emphasize is that even if productivity did not improve, it is still possible to raise salaries and prices.

Central banks around the world are calling this situation in which the salaries of all workers as well as product prices increase simultaneously by 2 percent annually as an inflation target.

Q: Could you explain your proposal to have the BOJ establish a salary growth percentage as a policy objective?

Watanabe: If prices rise by 2 percent and the rate of salary growth is also set at 2 percent due to improved productivity, one could expect salaries to rise by 4 percent. Setting a goal of a “4-percent increase in salary” over a “2-percent increase in prices” would be more easily accepted by workers and consumers and could receive the support of a wider range of people.

Q: But if the problem is a psychological one, wouldn’t it be difficult to change?

Watanabe: An overwhelming majority of people in Japan believe that prices should be kept as they are now. There was no sense of politicians and the BOJ taking advantage of the end of the coronavirus crisis to do something about the situation.

And even if one company did raise its salaries, if that was not reflected in higher prices, the spiral would stop there and not have any effect on the salaries of other workers.

Buying something cheaply from someone means repressing the salaries of those who work there. The first thing that must happen is the spreading of the recognition that cheap is bad.

But because that concerns how one views things, it should be much easier to do than handling such difficult issues as improving productivity or changing the practices of the labor market.

Q: What do you feel about the interest during the novel coronavirus pandemic in the New Deal policy implemented in the United States when it faced the Great Depression in the 1930s?

Watanabe: At that time, the United States was mired in serious deflation and then U.S. President Franklin Roosevelt allowed for cartels on prices and production volume. A form of coordination was established to forcibly stop prices from falling. While competition may be emphasized in normal times, during emergencies there was a need for a different policy response. As a result, severe deflation was brought under control.

I believe there is a need to try cartels as a measure to limit competition in Japan today in order to increase prices. It would not be in effect permanently, but only allowed temporarily in industrial sectors where excessive competition is occurring.

Q: But don't cartels always have a negative image?

Watanabe: It is true in Japan that excessive measures in industrial policy during the period of high economic growth led to reflection that has resulted today in extreme reluctance to use measures to promote cooperation. But I believe the time has come to try such measures.

Born in 1959, Tsutomu Watanabe originally worked for the Bank of Japan before taking on his present position at the University of Tokyo. He has been involved in the development of price indices and started a venture capital company that handles economic statistics.