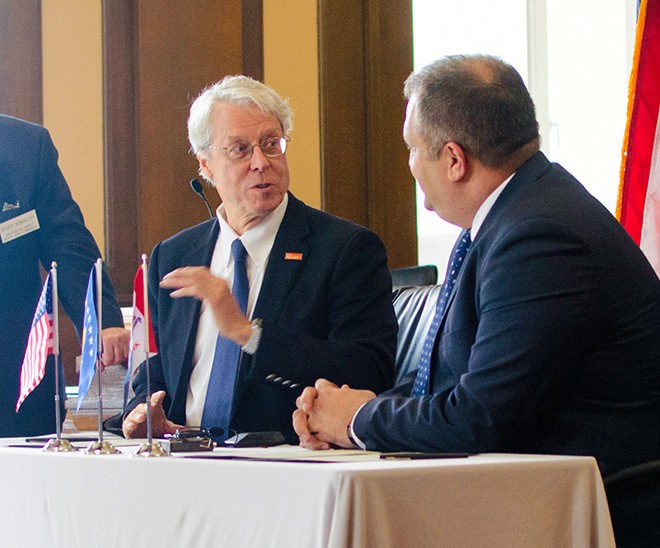 A hugely influential group of mayors in the United States unanimously adopted a resolution calling on Washington to embrace the Treaty on the Prohibition of Nuclear Weapons (TPNW) as a step toward finally ridding the world of nuclear weapons.

The call was made by the United States Conference of Mayors in reference to the treaty that took effect in January with the aim of working toward the complete elimination of nuclear arsenals.

The nonpartisan body, which represents more than 1,400 cities with populations of 30,000 or more, is part of the “Big Seven,” a group of organizations that represent local and state governments in the United States.

The U.N. treaty bans the development, retention and use of nuclear weapons. It has been ratified by 56 countries and territories. But the nuclear powers, the United States included, have not ratified the treaty. Nor has Japan, which relies on the U.S. “nuclear umbrella” for it ultimate defense.

The resolution urged the U.S. government “to consider reversing its opposition to the TPNW and to welcome the treaty as a positive step toward negotiation of a comprehensive agreement on the achievement and permanent maintenance of a world free of nuclear weapons.”

The resolution was adopted at the conference’s annual convention held at the end of August. It is not the first time for the conference to adopt a resolution with the same broad aims. In fact, it has done so since 2004.

While the resolution has no legal binding power, it sends a clear message to the U.S. government and the people of America.

Frank Cownie, the mayor of Des Moines in Iowa, proposed the resolution with seven others.

According to Cownie, two mayors initially expressed opposition to the treaty during a committee debate on international issues.

But after making a minor amendment, the resolution was unanimously adopted at a board meeting attended by more than 20 mayors that was held during the annual convention.

“Most American people are unaware of the TPNW, and this resolution we hope can help inform them,” Cownie told The Asahi Shimbun during an online interview. “I don't think that they understand the threat of nuclear weapons.”

The mayors and their supporters will now work to convince local congressmen and senators of their justness of their cause, Cownie said.

“Hibakusha have always played and served as humanity's moral compass regarding the absolute evil of nuclear weapons,” Cownie said as he urged the Japanese government to listen to “those voices in the second and third generations” and support them.

Yuki Miyamoto, a professor at DePaul University in Chicago whose work centers on nuclear discourse and environmental ethics, called the resolution significant, saying it illustrates increased awareness of the nuclear weapons issue among mayors.

Miyamoto noted that numerous grass-roots movements have forced policy changes that brought about reform in the United States.

Des Moines is one of more than 8,000 cities that consist of Mayors of Peace, an NGO that aims to abolish nuclear weapons. The organization is headed by Hiroshima Mayor Kazumi Matsui.

(This article was written by Tabito Fukutomi and Takashi Watanabe.)