An Asahi Shimbun aircraft flies over a new islet at Fukutoku-Okanoba in the Ogasawara island chain south of Tokyo on Oct. 15 to make aerial observations before the speck of volcanic rock disappears beneath the waves. (The Asahi Shimbun) 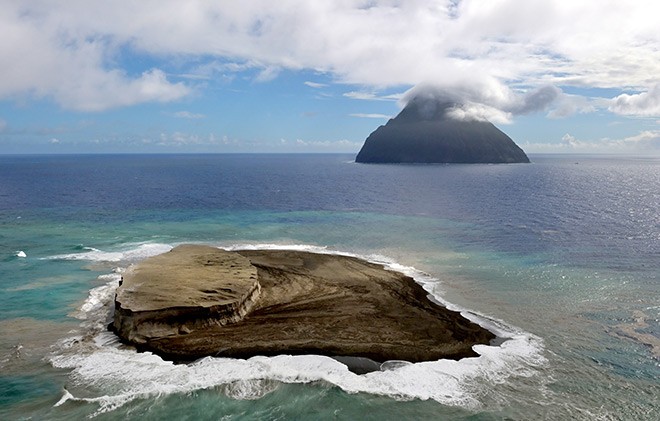 The new islet at Fukutoku-Okanoba in the Ogasawara island chain 1,300 km south of Tokyo on Oct. 15 with Minami-Iojima seen in the background (Kotaro Ebara)

A volcanic islet that suddenly emerged in the Pacific Ocean in August about 1,300 km south of Tokyo has shrunk to one-third over the past month, prompting experts to conclude it will vanish below the waves before long.

The Asahi Shimbun's Asuka aircraft flew to Fukutoku-Okanoba, a submarine volcano in the Ogasawara island chain, on Oct. 15 to observe the fast-disappearing outcrop. A geological expert accompanied the Asahi team.

The submarine volcano erupted on Aug. 13 and a horse hoof-shaped islet was the result, according to the Japan Coast Guard.

It was the first time in 35 years for a new islet to be formed in Fukutoku-Okanoba.

By mid-September, the eastern side of the volcano was submerged while the western area was down to one-third of its original size by mid-October, the coast guard said.

The island is comprised of pumice and volcanic ash, which erodes easily when exposed to the elements.

Setsuya Nakada, director-general of the Center for Integrated Volcano Research at the National Research Institute for Earth Science and Disaster Resilience, who made observations from the Asahi aircraft expressed doubt the islet will be visible for much longer.

He noted that a terrace-shaped bluff of deposited material repeatedly collapsed while the aircraft was making aerial sweeps of the islet.

Each time a cave-in occurred, steam rose from the ocean surface.

Nakada said rocks, ash and other materials deposited from the eruption were still extremely hot and generated steam when they came into contact with seawater after naturally breaking up.

Fukutoku-Okanoba is one of the 111 active volcanos in Japan.

New islets have periodically emerged in the area following volcanic eruptions. Sightings were made in 1904, 1914 and 1986. But they all eventually disappeared due to wind and wave erosion.

The aircraft also flew over Nishinoshima, which has erupted repeatedly since 2013. During the flyby, a fumarolic hole was still spewing hot gases and vapor even though Nishinoshima's volcanic activity had slowed down markedly.

Nakada said the composition of Nishinoshima and Fukutoku-Okanoba's magma is very similar, based on samples of materials recovered from the areas.

Because the Nishinoshima eruption was comparatively mild, lava continued to gush for quite some time. However, Fukutoku-Okanoba’s eruption was violent and rapid, releasing magma and gas that became pumice when it cooled.

“The new islet in Fukutoku-Okanoba will not survive very long as long as the current eruption phase continues,” Nakada said. “On the other hand, repeated eruptions may make the water shallower. That, combined with lava belching from the volcano, may yet make it possible for the islet to survive.”