Opposition leader does about-face after backlash 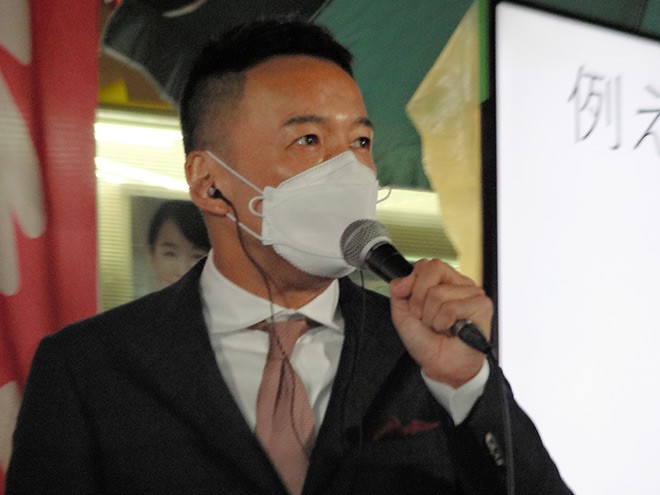 Facing a backlash from voters, the leader of a minor opposition party announced he will run in the Oct. 31 Lower House election under the proportional representation system and not in a single-seat constituency in Tokyo as he had planned.

Taro Yamamoto, who heads Reiwa Shinsengumi, retracted his plan to run in a single-seat constituency on Oct. 16 in the face of calls from voters for the opposition parties to coordinate their election strategy and put up a united front.

Yamamoto also announced that his party will not field its own candidates in seven electoral districts where an opposition party candidate is running so as to give the parties a stronger chance of defeating the ruling coalition led by the Liberal Democratic Party and its junior partner Komeito.

Yamamoto, giving a stump speech in front of Tokyo's JR Ikebukuro Station the same day, said he will place himself at the top of the list of proportional representation candidates.

Reiwa Shinsengumi had planned to run its own candidate in districts in Saitama, Chiba, Shizuoka and Osaka prefectures, as well as three in Tokyo. Those seven districts account for 40 percent of the party’s scheduled candidates.

Yamamoto announced Oct. 8 he will run for the Lower House from the capital’s No. 8 electoral district.

That move drew fire from local groups and voters who support a CDP candidate active in the community for the past six years or so, forcing Yamamoto to retract his plan on Oct. 11. But he had sought to run in another single-seat district.

Explaining his decision to run only as a proportional representation candidate, Yamamoto said he realized he would face problems if he competed with another opposition candidate in a single-seat constituency.