Aichi prefectural police have collected brochures of more than 17,000 automobiles over more than four decades to identify vehicles sought in a hit and run and other accidents. (Video by Toshihiro Kashiwagi) 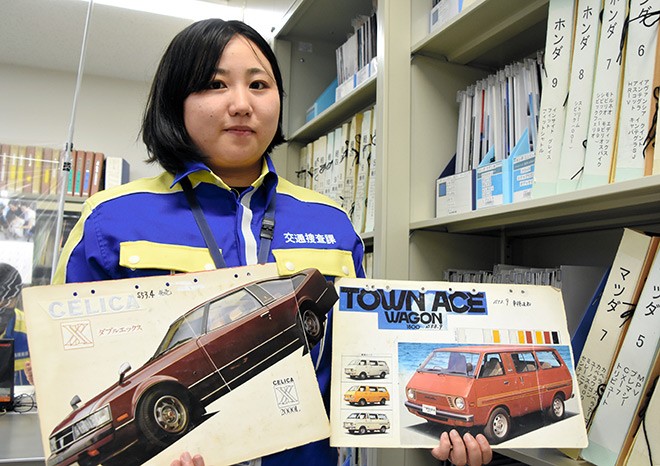 Misaki Hamaguchi holds clippings from automobile brochures at the Aichi prefectural police’ traffic investigation division in Nagoya. On shelves are a portion of brochures collected by the police force, with most stored in the warehouse in the basement floor. (Toshihiro Kashiwagi)

NAGOYA--Police hunt down even the most obscure vehicles sought in traffic accidents or crimes literally “by the book” in Aichi Prefecture, one of the most motorized societies in Japan.

At times, what ends up supplying the crucial piece in the puzzle of an investigation is a vast collection of brochures covering almost all vehicles running on the nation’s roads.

In summer, a hit-and-run case occurred during the night in the prefecture. The only clue police had was blurry footage from a dashboard camera.

Based on a glimpse of the front of a car coming from the side, officers investigating the case assumed it was Toyota Motor Corp.’s Aqua subcompact.

Misaki Hamaguchi felt something wasn’t quite right when she watched the footage with her colleagues at the traffic investigation division.

Paying attention to how the grille and fog lamps protruded and comparing subtle differences with other models in brochures, Hamaguchi determined that it was a Yaris, another subcompact manufactured by Toyota.

Investigators went on to identify a Yaris owner as a suspect.

Hamaguchi says she wasn’t interested in automobiles before being assigned to the division three years ago.

But it became a habit for her to follow running vehicles with her eyes and pay attention to their details, such as the positions of lights.

The 28-year-old officer often finds herself looking at vehicles even when she is off duty and spending time with her family.

Aichi prefectural police investigators started collecting brochures in the late 1970s to use them as reference materials when they conducted interviews for their cases.

Each folder contains clippings mounted on cardboard, including photos of vehicles taken from the front, back, left and right and a specification sheet showing their size, performance and other data. There are also notes on vehicles’ detailed characteristics, such as having “two stripes.”

With optional features increasingly changing for the same model in recent years, police have stopped clipping pages and are keeping the brochures intact.

A photo of Toyota’s Celica XX sports coupe released in 1978 is so large that part of it sticks out over the cardboard on which it is pasted.

It requires constant attention to keep enriching the collection because the same model could be slightly different depending on the manufacturing year due to minor changes.

“We make inquiries to dealers as soon as we find information on new models in magazines or on the internet,” Hamaguchi says.

The 2018 brochure of the BMW 7 Series, the German automaker’s top luxury sedan class, says: “Limited to one unit in the world.”

“It’s important to know that there are limited editions,” Hamaguchi says.

USED BY OTHER PREFECTURES

Young officers temporarily transferred on loan to Aichi Prefecture apparently spread the word about the collection when they returned to their home departments.

At least one prefectural police department has started collecting brochures on its own.

“It’s an array of precious materials collected by successive generations of officers by maintaining an observant eye,” Hamaguchi says. “It’s our asset and weapon.”