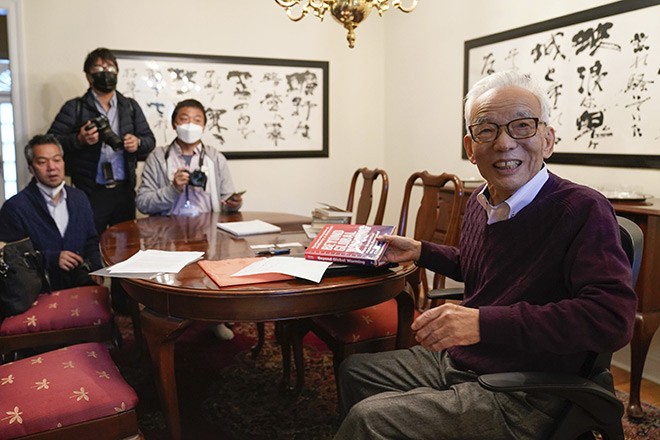 While I watched meteorologist Syukuro Manabe speaking at his U.S. home in an interview after he was named a co-recipient of the Nobel Prize in Physics, I noticed two poems hanging on the walls of his living room.

Inoue was a writer of national fame who was rumored to be a candidate for the Nobel Prize in Literature. But I had no idea who the latter was.

To learn more about Shirotori, I visited a museum dedicated to him in Kurihara, his hometown in Miyagi Prefecture.

Born in 1890, Shirotori started writing poems when he was a student at Tsukidate Junior High School under the prewar education system.

After graduating from Waseda University in Tokyo, he became a top poet of the “minshu-shi” (people poem) school, which used a colloquial style in depicting the lives and feelings of the common people.

He also wrote the lyrics to more than 200 school songs before his death at the age of 83.

“He is admired as a great man in his hometown, but I never imagined that he would be linked to a Nobel Prize,” said Yoshihito Sato, 71, who has been studying the poet for 44 years.

“The wide plain on a freezing evening/ Is dark purple, dotted with white spots of snow here and there/ … on the surface of the earth, on the dried grass covered by ice and on the snow on the cold land/ (a locomotive) runs, raining soot and sobbing”.

The piece conjures up images of a farming village in the Tohoku region in the dead of winter.

The “people poem” school advocated the principles of “liberty, equality and fraternity” amid the Taisho Democracy movement and dominated the poetry circles of the first half of the Taisho Era (1912-1926).

But the school lost steam after its works were criticized by the “geijutsu” (art-oriented) school of poets, including Kitahara Hakushu (1885-1942), for being “indistinguishable from prose if written without line breaks.”

Shirotori loved nature and weaved words into poems in a liberal and rustic style.

A line in one of his poems says, “Civilization sickens the countryside like a boil.”

I wonder how his poems have resonated with Manabe, who contributed to our understanding of global warming through his meteorological research.