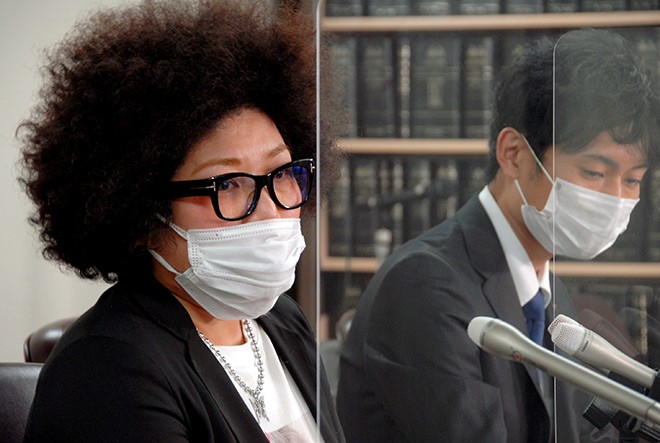 Kyoko Kimura, the mother of professional wrestler Hana Kimura who committed suicide after being targeted for online bullying, at a May 19 news conference following a court ruling (Asahi Shimbun file photo)

The government has good reason to initiate debate on revisions to the penal code to impose tougher penalties for insulting people in public, but moving too hastily on this issue could have serious ramifications for the future.

A draft proposal by a working group of the Justice Ministry’s Legislative Council would increase punishments for infringing on another person’s honor in a public forum.

The Legislative Council is due to present its proposal to the justice minister after it is discussed at a general meeting on Oct. 21.

At present, public insult, or “bujoku,” is punishable by detention of less than 30 days or a fine of under 10,000 yen ($88). The proposed revision would raise penalties to imprisonment of a maximum of one year or a fine of 300,000 yen or less.

The statute of limitations on denigrating an individual or group in public would also be extended to three years from the current one year.

The government decided it was time to act because of the growing influence of the online community.

Insulting postings on social media sites and cyberspace have become brutal and caused harmful consequences for those targeted.

Hana Kimura, a professional wrestler, committed suicide in May last year after she became a target of cyberbullying. Her death triggered calls for harsher punishments.

Clearly, there is a strong case for making a policy response to changing situations.

Still, there is no clear definition as to what expressions should be deemed criminally insulting and punishable by the state. Freedom of speech and expression risk being eroded if harsher punishments are arbitrarily applied.

The issue requires broad debate from multiple perspectives in tandem with careful explanations to the public.

Yet, the Legislative Council’s working group approved the draft revision that the justice minister submitted for consideration in mid-September after only two sessions without any changes.

The minutes of the meetings have yet to be disclosed. This means the public is being left out in the cold while discussions on revisions are going on.

The penal code makes a distinction between insult and defamation, an act of damaging another person’s honor and dignity that is punishable by imprisonment of up to three years or a fine of 500,000 yen or less.

However, such acts are not punishable if the accusation relates to the public interest, was made for public benefit and is thought to be factual or has good grounds for being regarded as such, according to penal code provisions and court precedents.

The penal code also stipulates that the act of damaging the honor of a public servant or an election candidate is not punishable if it is based on fact.

With regard to insult, however, no such provisions exist to protect freedom of speech and expression.

If penalties are to be made harsher, the government should consider incorporating conditions for exemption into the law after listening to a wide range of opinions on the issue.

Settling disputes over defamation and insult through civil procedures among the parties concerned is a growing international trend.

In its comment on punishment against defamation in 2011, the U.N. Human Rights Committee argued that criminal prosecution and penalties for defamation are not necessary and that imprisonment is never an appropriate penalty.

In April, a legal provision was revised to allow for identifying authors of online comments through simpler procedures. Similar measures should be considered to make it easier to file civil lawsuits for defamation and insult to ensure swift redress for damage and to deter unlawful comments.