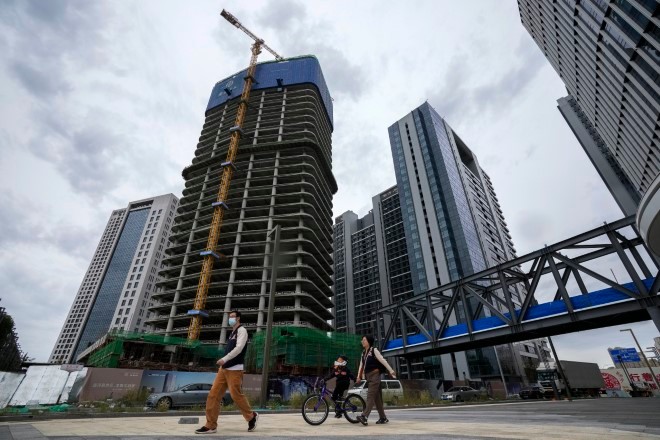 A family walks by a commercial office buildings under construction in Tongzhou, on the outskirts of Beijing on Oct. 4. (AP Photo)

BEIJING--China’s economic growth sank in the latest quarter as a slowdown in construction and curbs on energy use weighed on its recovery from the coronavirus pandemic.

The world’s second-largest economy grew by 4.9 percent over a year ago in the three months ending in September, down from the previous quarter’s 7.9 percent, government data showed Monday.

Factory production, retail sales and investment in construction and other fixed assets all weakened.

Construction, an industry that supports millions of jobs, has slowed since regulators tightened control last year over borrowing by developers.

One of the biggest, Evergrande Group, is struggling to avoid defaulting on billions of dollars owed to bondholders. That has fueled fears about the health of other developers, though economists say the threat to global financial markets is small.

Manufacturing also was hampered in September by power cuts imposed by some major provinces to avoid exceeding official efficiency goals.

Private sector forecasters have cut their growth outlook this for China, though they still expect about 8 percent, which would be among the world’s strongest.