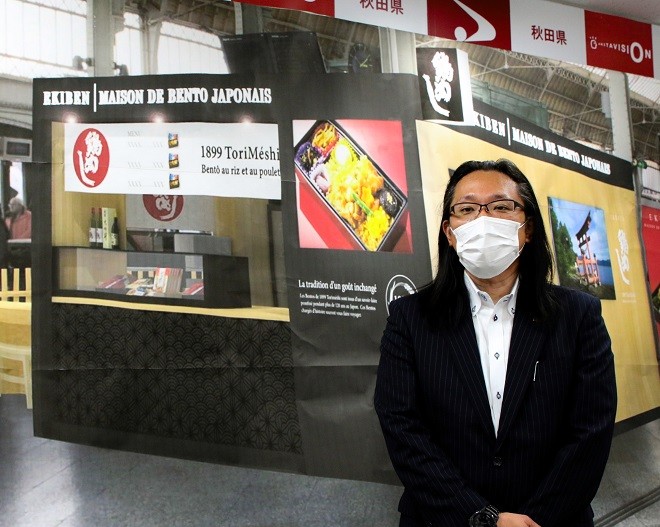 Hanazen President Shuichi Yagihashi at the Akita prefectural office in Akita on Sept. 14 against the backdrop of an artist's rendition of the “ekiben” boxed lunch shop that the company will open at Gare de Lyon station in Paris in November. (Yasuhiro Kumabe)

Boxed lunch meals called “ekiben” so beloved by Japanese taking long-haul rail trips will soon debut at the Gare de Lyon station in Paris as part of an initiative to introduce travelers to this country's train cuisine culture.

In addition to specialty of tasty chicken pieces atop rice served in a box, the company will provide travelers with “Akita Bento” meals over the course of six months from November to promote the charms of Akita Prefecture and Japan's ekiben culture.

Whether the initiative takes off remains to be seen as French people are not accustomed to eating cold boxed meals while traveling by train.

Still, Hanazen President Shuichi Yagihashi reckons his company will make inroads, noting that the Gare de Lyon station is one of the biggest terminals in France.

“It's our goal to make Torimeshi chicken rice become synonymous with ekiben, instead of promoting it as a store name,” he said.

Six varieties of boxed meals, ranging from a reasonable set priced at 7 euros (932 yen, or $8) to a limited offer of 15-euro Akita Bento, will be sold at the shop called “EKIBEN ToriMeshi Bento.” The outlet has a floor space of 50 square meters.

Hanazen anticipates 630,000 euros in sales in the six months.

Hanazen is the only company that has expanded its business in European Union member countries, according to Yagihashi.

The company decided to operate in France because of its network of long-distance train services.

In 2019, Hanazen opened a roadside shop in Paris as its foothold. The company filed an application with the French National Railway Co. on two occasions before finally obtaining permission to set up a shop at the station.

Akita Bento is based on Torimeshi Bento and incorporates many local specialties from the northern prefecture, such as “kiritanpo” rice sticks, Inaniwa udon noodles, “iburigakko” pickles and “edamame” green soybeans.