GOHAN LAB/ Nagaimo yam and eryngii mushroom sauteed with pork: Beauty of the dish lies in the complex and rich flavor of miso 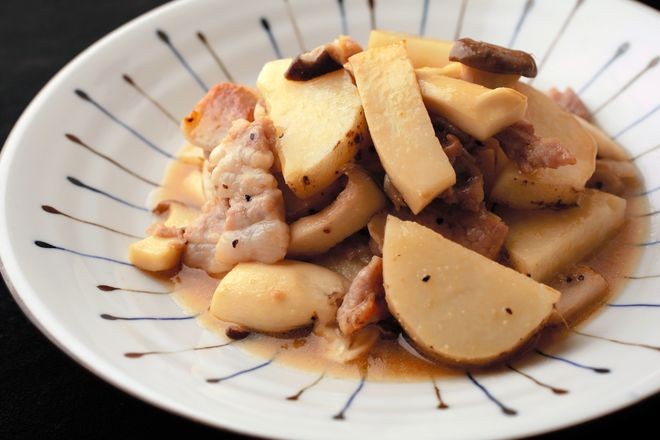 Miso, one of the five basic seasonings of Japan denoted by the syllabary “sa shi su se so,” is closely associated with Japanese cuisine.

But it is now used by chefs of not only Japanese cooking but also Chinese and Italian cuisines. The wide use of miso will be explored in a four-part series starting this week.

The flavor of miso is a complex fusion of saltiness, sweetness, umami, sourness and bitterness characterized by the rich aroma and savor.

Katsuhiko Yoshida, a Chinese cuisine chef who oversaw the cooking aspect of the recipe, says he uses miso when he wants to add body to stir-fried and simmered dishes.

“Rich in umami and balanced in taste, it is a star seasoning,” he says.

This week’s dish is a miso-flavored stir-fry using nagaimo yam, eryngii mushroom and pork. The flavor turns out somewhat sweet after sugar and soy sauce is added along with the miso.

Although the light-colored relatively salty type such as Shinshu miso was used in the recipe, you may use the miso in your fridge. The amount of soy sauce or sugar may be changed depending on how your miso tastes.

Although nagaimo is less likely to absorb the flavor, the seasonings will nicely coat it.

Miso is classified according to the flavor, color and types of “koji,” fermenting vessel, such as rice, barley and soybeans.

According to data compiled by the Japan Federation of Miso Manufacturers Cooperatives formed by miso makers nationwide, rice miso makes up about 80 percent of all miso that are shipped.

About half of all rice miso are the light-colored yellowish salty type typified by Shinshu miso. The federation’s data shows that although the shipping volume of miso has fallen 20 percent from 20 years ago, exports are rising probably due to the growing interest in Japanese cooking.

1. Scrub nagaimo with pot scourer and remove root. Cut in half lengthwise with skin and slice into 1 cm-thick half circles (PHOTO A). Cut length of eryngii in half and slice into 7 to 8 mm-thick pieces.

2. Cut pork slices into pieces 2 cm wide, place in bowl and add prior seasonings of soy sauce, sake and black pepper. Rub them in lightly. Then add katakuriko starch and mix.

3. Thoroughly mix miso with other seasonings and water in a bowl. (PHOTO B).

Midori Kasai is a professor emerita at Ochanomizu University and former chairwoman of the Japan Society of Cookery Science.

Miso is a seasoning made by mixing steamed soybeans with koji and salt, then fermenting and aging them. Koji is a starter made by attaching the koji fungus to rice, barley or soybeans. Each becomes rice, barley and soybean miso with different flavors and aroma depending on the balance of the salt and koji. The miso is termed “karakuchi” (salty taste) if low in koji and high in salt content and “amakuchi” (sweet taste) if high in koji and low in salt content.