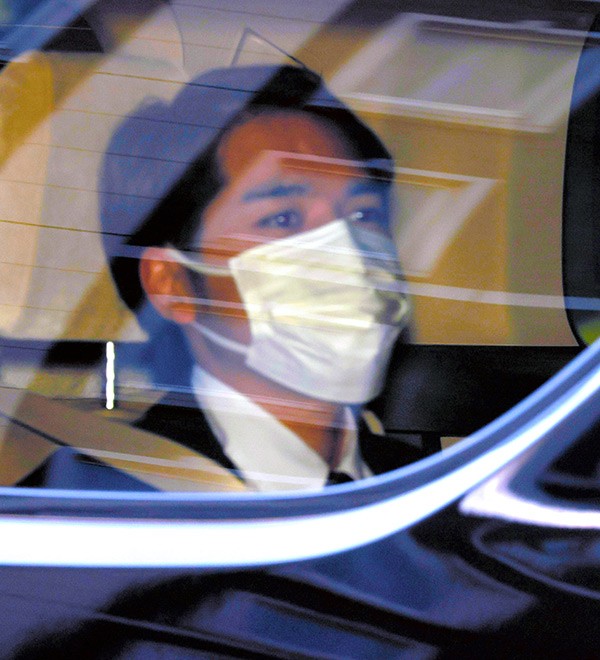 Kei Komuro, Princess Mako’s fiance, is seen in a car entering the Akasaka Estate, where her family’s residence is located in Tokyo, on the morning of Oct. 18. (Tatsuya Shimada)

With just a week left before they officially tie the knot, Princess Mako and her fiance, Kei Komuro, reunited on Oct. 18 for the first time in three years.

Komuro spent three and a half hours meeting with Mako and her family at their residence that day, following his return from the United States where he was studying law.

Mako and Komuro, a commoner, are scheduled to get married on Oct. 26 and register their marriage the same day.

The meeting took place at the Akasaka Estate, where the residence of Mako’s parents--Crown Prince Fumihito and Crown Princess Kiko--is located in central Tokyo. Komuro arrived at 9:15 a.m. after leaving his home in Yokohama around 7:45 a.m.

Komuro, 30, is expected to have informed them of his upcoming marriage with their oldest child.

After returning to Japan on Sept. 27, he self-quarantined at his home for two weeks.

Mako, 29, and Komuro became unofficially engaged in September 2017. They began seeing each other while they attended International Christian University on the outskirts of Tokyo.

They stayed in touch but have not seen each other in person, as Komuro remained in New York until last month.

Komuro graduated from the law school in May and took a bar exam for the state of New York in July.

His exam results will become available by the middle of December, but he has already landed a position with a law firm in the state.

Mako is scheduled to meet with her uncle, Emperor Naruhito, and his wife, Empress Masako, on Oct. 22, and then Emperor Emeritus Akihito and Empress Emerita Michiko on Oct. 25, to inform them about her upcoming marriage.

After they get married on Oct. 26, Mako and Komuro will hold a joint news conference as Mr. and Mrs. Komuro.

The pair will move to the United States to start their new life as soon as they are finished preparing.