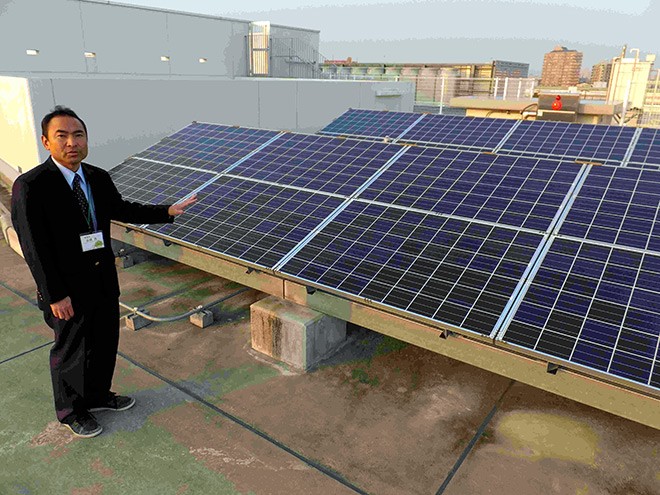 Matsue Elementary School in Tokyo's Edogawa Ward has solar power panels on its roof and an electric condenser inside the building in 2015. (Asahi Shimbun file photo)

The Tokyo metropolitan government will consider mandating the installation of solar power equipment for new houses built in the capital to help meet its goal of net zero carbon dioxide emissions by 2050.

It plans to solicit the opinions of experts and industrial groups, including home builders, and promote wide discussions on financial aid and other related issues.

The Tokyo government mandate would likely target small and mid-sized new buildings of a certain scale.

These structures, including apartments and detached houses, account for 98 percent of the estimated 50,000 buildings constructed annually in Tokyo.

It is targeting those buildings to accelerate the installation of solar power equipment in the sprawling, densely populated capital.

The Tokyo government expects that 60 to 70 percent of houses that exist in 2050 could be ones that are built from now.

“Buildings are used over several decades, so securing environmental performance initially when they are built is extremely important,” Tokyo Governor Yuriko Koike said on Oct. 17 at an online international symposium called Asahi World Forum 2021, hosted by The Asahi Shimbun. “Future buildings will design the future.”

In Tokyo, an estimated 70 percent of carbon dioxide emissions are generated from air conditioning, hot-water supplies and lighting used in buildings, including offices and homes.

Solar power equipment, however, has not been widely adopted in Tokyo.

According to the metropolitan government’s estimates based on daylight hours and other factors, more than 80 percent of houses in Tokyo are suited for solar power equipment, but the actual introduction rate remains only around 5 percent.