U.S. occupation photos only capture bright side of its rule 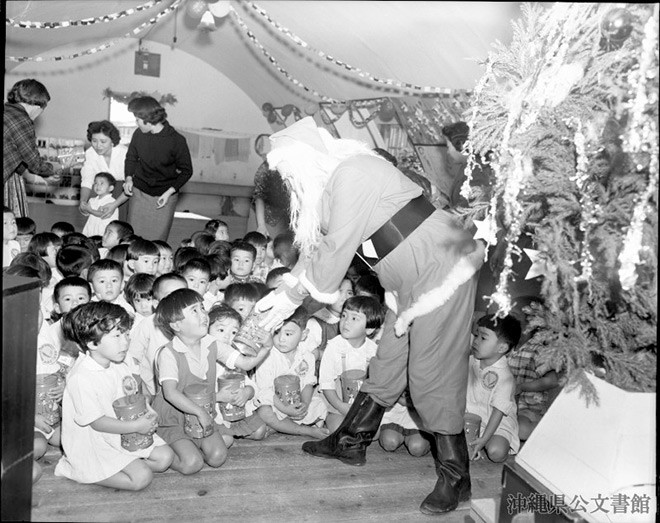 A man dressed as Santa Claus delivers Christmas gifts at a nursery school in Okinawa in a photo taken in 1963 by the U.S. Civil Administration of the Ryukyu Islands (USCAR), which governed Okinawa until 1972. (Provided by Okinawa Prefectural Archives)

Thousands of “publicity” stills authorized by the U.S. military during the occupation of Okinawa following World War II were purely for propaganda purposes to illustrate American largesse while avoiding the uncomfortable issue of the massive U.S. base presence there.

They were taken by the U.S. Civil Administration of the Ryukyu Islands (USCAR), which served as the government of Okinawa from 1950 until 1972 when Okinawa returned to Japanese sovereignty.

The images, now on display at the archives’ website, provide a detailed record of interactions between Okinawans and their American occupiers as well as the reconstruction of Okinawa, which was reduced to charred ruins by the Battle of Okinawa in 1945 that claimed about 200,000 lives on both sides. Roughly half were Okinawan civilians.

One photo shows local children breaking out in smiles as they receive Christmas gifts from a man dressed as Santa Claus. Another image captures local teachers studying English while an American instructor supervises the class.

There is also a photo of Americans wearing kimono during the traditional "Hinamatsuri" doll festival held each March 3 and one of local people at a commercial fair celebrating Okinawan and U.S. culture.

The overriding message of the massive archive was to drive home the benefits of U.S. rather than Japanese rule after a devastating war that claimed around 3 million Japanese lives.

The photos were mainly published in public relations magazines for local consumption and aimed at showcasing Okinawa’s development under U.S. military rule.

USCAR’s public relations bureau was tasked with gathering and publishing information in Okinawa to ensure that U.S. bases operated smoothly.

The Okinawa Prefectural Archives eventually amassed around 10,000 photos, including ones of the high commissioner of USCAR, the top military post. The photos first went on public display around 2001.

In 2017, the archives began collecting more photos and released 11,481 images online for the first time in August. They are classified into 48 categories, such as “General Education,” “Ryukyuan-American Friendship,” “Police & Fire Departments” and “Armed Forces.”

Sayaka Aso, a staff member at the archives who sorted the photos into categories, called them an invaluable record of Okinawan society’s reconstruction after the war.

But she also urged people to bear in mind that the images were taken from the perspective of USCAR since none of them directly capture damage caused by the U.S. military.

For example, no photo was taken immediately after a June 1959 U.S. military aircraft crash that killed 17 people, including young children at Miyamori Elementary School in Ishikawa, present-day Uruma.

Instead, photos were taken of people affiliated with the U.S. military visiting children injured in the accident and offering food supplies to local residents as well as the USCAR high commissioner presenting a check to pay compensation to the school.

Nor was any photo taken in connection with the rape and murder of a 6-year-old girl by a U.S. soldier in 1955.

“Next year will mark the 50th anniversary of Okinawa's reversion to Japan,” said Aso. “I hope these photos will help people think about the U.S. military’s rule by looking at what USCAR chose to record or not to.”

Visitors to the Okinawa Prefectural Archives’ official website can view the photos by using its search functions. Some of the images and related materials are also displayed at an exhibition the archives is currently holding. Admission is free.