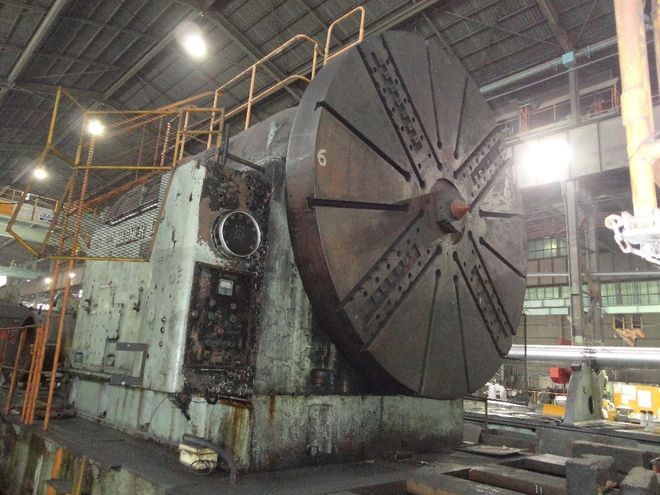 KURE, Hiroshima Prefecture--A massive lathe believed to have been used to fashion the main guns of Japan's mighty World War II battleship Yamato was in danger of becoming a rusting relic until a crowdfunding raised the initial target of 100 million yen ($876,500)--in just a single day.

The city government here mounted the fund-raising drive in August and by Sept. 30 had raised a whopping 269.48 million yen from 6,626 interested parties.

City officials are now setting their sights on the best way to exhibit the lathe at the Kure Maritime Museum, also known as Yamato Museum, based on feedback from contributors.

A lathe is a machine tool used to curve metal and parts.

Imported from Germany in 1938, it was used at the Kure Naval Arsenal and is the only large machine tool associated with Yamato that survives to this day, according to city officials.

Yamato was sunk during the closing days of the Pacific War in 1945 while making a sortie to Okinawa Prefecture on a suicide mission.

The lathe is about 17 meters long, 5 meters wide and 5 meters high. It weighs an incredible 219 tons.

It was used at a steel mill after the war and then taken over by Kishiro Co., a machinery parts manufacturer based in Akashi, Hyogo Prefecture, at its Harima factory between 1996 and 2013.

The city government sounded out the company about exhibiting the lathe before the museum opened in 2005, but had to abandon the idea because the tool was still in use.

However, Kishiro finally offered to donate the historic wartime relic to the museum last year after it replaced the machine.

The city government is planning to put the lathe on display in an open space adjacent to a parking lot at the museum.

City officials initiated the crowdfunding campaign on Aug. 3 to raise funds for transportation, groundwork construction and the installment of a roof over the exhibition area, utilizing the “furusato nozei” system that allows people to pay a portion of their taxes to the municipality of their choice.

It reached its target of 100 million yen the following day.

Donations came from all over the country and even from overseas, with sponsors saying they loved the Yamato for what it stood for and wanted it to be preserved for future generations.

In response to contributors who expressed their hopes the lathe would be housed indoors to prevent the tool from developing rust due to sea air and the elements, the officials will reconsider ways to preserve and exhibit the lathe.