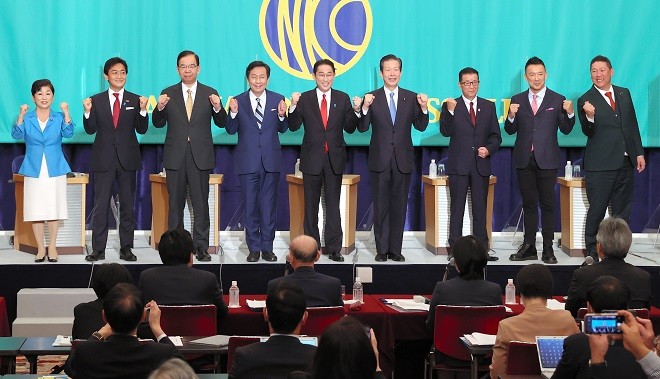 Party leaders pose for a photo before a debate session in Tokyo’s Chiyoda Ward on Oct. 18. (Shiro Nishihata)

The official campaign period for the first Lower House election in four years started on Oct. 19.

This general election is about choosing either continued rule by the coalition of the Liberal Democratic Party (LDP) and its junior partner, Komeito, or a power shift to an opposition alliance led by the Constitutional Democratic Party of Japan (CDP).

The LDP has acquired a new “face for the election,” Prime Minister Fumio Kishida, who replaced the unpopular Yoshihide Suga. Just two weeks since he took office, Kishida’s leadership qualities are still unknown.

The four opposition parties that have agreed on a joint campaign platform will field their unified candidates in many constituencies. If they want to go beyond simply attracting voters critical of the ruling coalition, the opposition alliance needs to convince voters that they have the ability to govern the nation.

During the nearly nine years of the administrations of former Prime Minister Shinzo Abe and his successor, Suga, the dominance of the powerful ruling coalition, which faced no serious challenge from weak and fragmented opposition, brought some political evils.

After the 12-day campaign period, voters will have to choose a government that can help cure the nation’s ailing politics and lay out a hopeful vision for the nation’s future.

On Oct. 18, the last debate among party heads before the election was officially announced was held at the Japan National Press Club. A broad range of topics were addressed, including measures to deal with the current situation of the COVID-19 pandemic, challenges concerning economic growth and wealth distribution and key foreign and security policy issues.

One particularly important question discussed at the debate was what kind of government will be formed if the opposition alliance unseats the ruling coalition from power.

Yukio Edano, leader of the CDP, the largest opposition group, asked the other parties in the alliance to cast ballots for him in the vote to choose the next prime minister but stated unequivocally that his party will govern the nation without forming a coalition with other groups.

The CDP and three other opposition parties--the Japanese Communist Party, the Social Democratic Party and Reiwa Shinsengumi--have agreed on a set of policy proposals forwarded by a citizen advocacy group called the Civil Alliance for Peace and Constitutionalism.

Edano said the CDP will cooperate with these three opposition partners within the boundaries of their joint platform and work with the Democratic Party for the People through their respective policy agreements with Rengo, the Japanese Trade Union Confederation, the umbrella organization of labor unions.

But Edano made it clear that his Cabinet would not include any lawmakers of other parties.

In response to questions about his party’s cooperation with the JCP, whose policy platform calls for scrapping Japan’s security treaty with the United States and a future disbandment of the Self-Defense Forces, Edano pointed to an agreement that his government would not be bound by policies of any of its partners in the alliance.

The Edano Cabinet would exercise its administrative powers to ensure effective SDF responses to security emergencies in a responsible manner, the CDP chief said.

Would the Edano administration be able to gain a stable political footing? Voters’ anxiety will remain unless he can offer really convincing answers to these questions.

The two parties of the ruling coalition also need to work out differences on certain issues. Komeito, for example, argues that Japan should participate in the first meeting of nations that have signed the U.N. Treaty on the Prohibition of Nuclear Weapons as an observer.

But Kishida showed a reluctance to get his government involved in the conference. Komeito leader Natsuo Yamaguchi voiced support for the proposal to allow married couples to use separate surnames and legislation to promote equality for LGBT people, but Kishida remained skeptical.

DIET’s ROLE SHOULD BE REVITALIZED

The LDP led by Abe won a resounding victory in all the past three Lower House elections, including the one in 2012 that gave the LDP-Komeito coalition a public mandate. The LDP gained more than 60 percent of the seats in each of these elections.

To be fair, the LDP’s political dominance has had some upsides. It has saved the nation from the political instability that caused frequent changes of the prime ministers for years. But it has also seriously undermined the role of the Diet.

The Abe administration used the ruling coalition’s overwhelming majority in the Diet to force through a series of controversial legislation including the new national security legislation that opened the door for Japan to exercise its right to collective self-defense under certain circumstances.

Abe also long ignored opposition requests for an extraordinary Diet session based on a constitutional provision and often failed to give sincere answers to opposition questions at the Diet. His tendency to disrespect the political leader’s responsibility to explain policy decisions and actions was inherited by his successor, Suga.

Abe gave false answers 118 times at the Diet to questions related to a scandal concerning expensive hotel banquets held for his supporters on the eve of annual tax-funded cherry blossom viewing parties hosted by the prime minister. Abe has yet to offer clear explanations to clear up the allegations despite the huge blow the scandal delivered to the role of the Diet as the watchdog of the government.

The long period of the LDP’s political dominance has led to arrogance and a decline in political discipline and integrity within the administration.

Starting in the later years of its rule, the Abe administration was dogged by a string of political scandals including those concerning the cherry blossom viewing parties and two school operators linked directly or indirectly to Abe, Moritomo Gakuen and the Kake Educational Institution.

These scandals deeply damaged the credibility of politics and the administration. But the LDP failed to take any action to stop the Abe administration’s abuse of power or clean up its own act. The new Lower House members elected in the poll, whether in the ruling or opposition camp, will have a duty to revitalize the Diet’s role.

Experts point to the political effects of single-member districts, or those represented by a single officeholder, as one factor behind the LDP-Komeito coalition’s overwhelming victories in the past three Lower House elections.

In the Lower House election four years ago, the LDP secured 75 percent of the seats contested in the single-seat districts. But the party gained only 48 percent of the votes cast.

This happened partly because of the fragmented opposition. While the LDP and Komeito agreed to back unified candidates in almost all constituencies, opposition parties fielded their own candidates separately, causing votes against the ruling camp to be divided among the groups.

Another important driver of the ruling coalition’s sweeping victories was low voter turnout.

The voter turnout in the 2012 Lower House poll, which brought the LDP back into power, was 59.32 percent, some 10 points lower than the figure for the 2009 election, which swept the Democratic Party of Japan to power.

The rates were 52.66 percent in 2014 and 53.68 percent in 2017, both among the lowest on record. In the previous Lower House poll, the LDP got votes from only 25 percent of the total population of voters in the single-member districts.

Of course, there is no denying that a certain portion of voters who did not show up at the polls were probably supporters of the ruling coalition, either ardent or lukewarm ones. Generally speaking, however, low voter turnout is said to work in favor of the LDP-Komeito coalition, which has a powerful vote-gathering machine as well as many local assembly members.

If voters behave differently this time after nearly two years of the pandemic, acting on the renewed recognition about how politics directly affects their lives and livelihoods, the election results could be quite different from those of the past three polls.