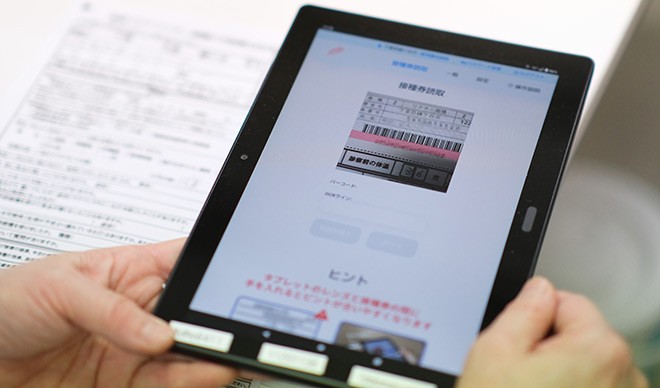 A tablet computer provided by the central government has trouble accurately scanning the small numbers on the vaccination ticket. (Asahi Shimbun file photo)

Erroneous information on potentially hundreds of thousands of people was entered into the government’s COVID-19 vaccine database, which could delay its plans to start issuing digital vaccination certificates by year-end.

In some cases, the centrally managed vaccination recording system (VRS) contained no inoculation records of those who had actually received vaccine shots, according to officials of the newly established Digital Agency, which manages the VRS, and other sources.

Mechanical and human errors have been blamed for the errors.

Under the VRS that went into operation in April, local governments register information on vaccine recipients, such as names, birthdates and vaccination ticket numbers, in advance.

Personnel at medical institutions and vaccination centers then enter data, including the dates of the first and second shots and which vaccine was used.

All of the information is integrated under the VRS.

The VRS was supposed to allow the central government to gauge progress in the vaccination program in real time. For the immunization programs of other diseases, the data typically reflects the situation two to three months in the past.

But records in the VRS stated that some people had received their second jabs despite having not even been given the first shot, for example, the sources said.

Officials with the agency and local governments said the flawed data came from medical institutions and vaccination centers.

In one entry task, medical personnel must use a camera in a tablet computer distributed by the central government to scan the 18-digit number on the vaccination ticket for each recipient.

The officials said personnel themselves have entered the wrong vaccination dates and mixed up the Moderna and Pfizer vaccines in the reports.

The Digital Agency estimated that inaccurate records made up 0.07 percent of all data in the system.

It also said the ratio was 1 percent or more for some local governments.

Central government records showed that 78 million people in Japan were fully vaccinated as of Oct. 17. If information about 1 percent of them was inaccurate, the records of hundreds of thousands of vaccinated individuals could be false.

The errors were discovered at a time when the Digital Agency is preparing to start accepting applications for digital vaccination certificates. It plans to use VRS records for the process.

But if flawed information remains in the VRS, it will become impossible for the agency to issue the certificates with 100-percent accuracy.

Officials can correct the errors by, for example, checking the written vaccination tickets, but that task would likely prove cumbersome and stretch local officials thin.