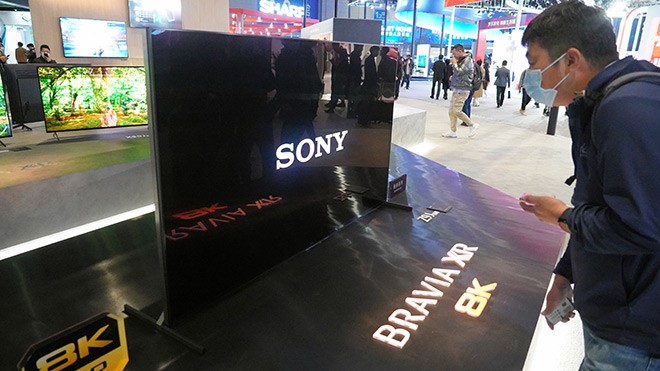 Sony Group displays one of its televisions at a home electronics exhibition in Shanghai in March. (Asahi Shimbun file photo)

BEIJING--Sony Group's Chinese subsidiary was fined 1 million yuan (17.8 million yen, or $156,000) for violating China's advertising laws over its plan to hold a new product launch event on the anniversary of the Marco Polo Bridge Incident.

The armed clash between Japanese and Chinese troops at a bridge near Beijing in 1937 triggered the Second Sino-Japanese War.

China's market supervision bureau in Beijing’s Chaoyang District announced the fine on the internet on Oct. 12.

In June, Sony had announced that it was planning to hold a new product launch event on July 7, the anniversary of the Marco Polo Bridge Incident.

Sony on June 30 advertised its plan on the internet to hold the new product launch event at 10 p.m. on July 7, igniting a torrent of online criticism in China that cited the date and time coinciding with that of the Marco Polo Bridge Incident, according to Chinese authorities.

On July 1, Sony withdrew the advertisement and was forced to apologize for the plan.