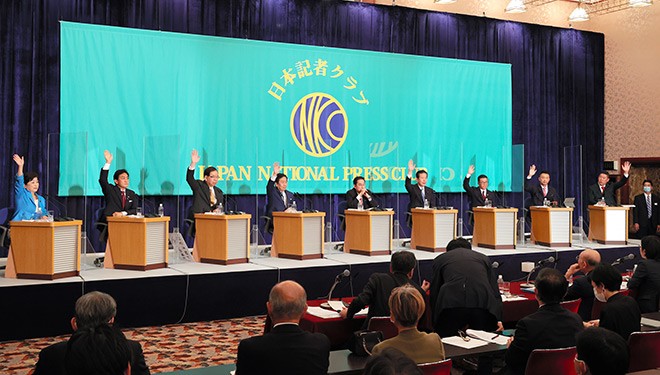 The leaders of nine parties make their stances clear regarding legal revisions to allow married couples to choose which surname to use during a debate at the Japan National Press Club in Tokyo on Oct. 18. Prime Minister Fumio Kishida, center, is the only one not raising his hand. (Shiro Nishihata)

Prime Minister Fumio Kishida remained vague on details of his promised anti-pandemic spending package, but he gave clear views on other issues that will likely appease the more conservative elements of his party’s supporters.

Kishida was among nine party leaders who took part in a debate on Oct. 18 ahead of the official start of campaigning for the Oct. 31 Lower House election.

The prime minister, also president of the ruling Liberal Democratic Party, has said his administration would put together a massive spending package to lift the economy from the sluggishness caused by the novel coronavirus pandemic, including cash payment programs.

Ichiro Matsui, the head of Nippon Ishin (Japan Innovation Party), asked Kishida about how and when he would distribute benefits for those suffering economically due to the pandemic.

Yuichiro Tamaki, head of the opposition Democratic Party for the People, also asked Kishida what was on the minds of many people: When will the cash payments actually reach the public?

“Those are issues we have to settle in the future,” he said.

During the debate, Kishida repeated his pledge to create a “new capitalism” that would lead to higher incomes through a positive spiral of economic growth and redistribution of benefits.

Yukio Edano, the head of the main opposition Constitutional Democratic Party of Japan, asked Kishida about whether he would increase the corporate tax rate for large companies.

Kishida only said, “While there will be major discussions about the redistribution policy, we will think about the specific details after thinking about reactivating the overall economy.”

However, Edano was also asked about where his administration would obtain revenues for his party’s programs should it take control of government, including a temporary cut in the consumption tax rate from the current 10 percent to 5 percent.

Edano only said that government bonds would be issued to pay for the various measures.

The nine party leaders were also asked about their positions regarding legal revisions to allow married couples to choose separate surnames as well as a law to promote equality for LGBT individuals.

Kishida was the only party leader to oppose both measures.

The LDP leader did say the government’s message on how it was dealing with COVID-19 has not reached the public, but he stopped short of blaming his two predecessors.

In fact, he remained ambiguous when asked about the positive and negative aspects of the administrations of Shinzo Abe and Yoshihide Suga.

However, Kishida showed no hesitancy in giving his stance on an issue long pushed by Abe: constitutional revision.

Kishida said he was prepared to hold a national referendum that would allow the public to vote on an amendment proposal that covered the four changes sought by the LDP.

One revision would clearly spell out the legal standing of the Self-Defense Forces under the Constitution.

But he returned to his vague ways when asked about the LDP’s campaign platform that said defense spending would be raised to about 2 percent of gross domestic product, effectively doubling the amount spent on defense.

Kishida said too much should not be placed on such numbers.

On the recurring issue of whether Japan should possess the capability for pre-emptive strikes against enemy bases preparing to launch ballistic missiles, the prime minister only called for wide-ranging debate on the matter.

Komeito, the LDP’s junior coalition partner, has come out with a more cautious stance regarding that capability.

(This article was written by Natsuki Okamura and Akira Minami.)