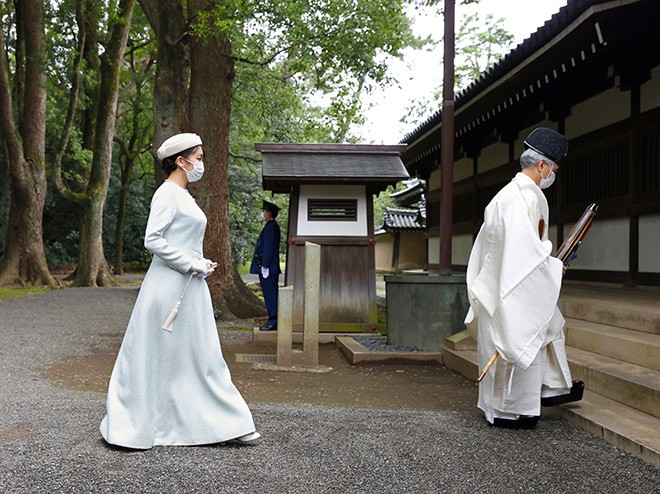 Princess Mako heads to the sanctuaries within the Imperial Palace to offer prayers on Oct. 19. (Pool)

Princess Mako prayed at the three sanctuaries within the Imperial Palace on Oct. 19, but she did so differently from past female imperial family members.

By deciding to marry her college sweetheart, Kei Komuro, on Oct. 26, Mako, the oldest daughter of Crown Prince Fumihito and Crown Princess Kiko, has made clear she does not want any of the formal ceremonies associated with a marriage of a female imperial family member.

In the past, they have typically worn traditional kimono to pray at the three sanctuaries as part of a series of events connected to marriage.

But Mako wore a light green dress and prayed in the garden facing the sanctuaries rather than set foot inside. She is said to have reported on her upcoming wedding in an address to her imperial ancestors and the gods enshrined in the sanctuaries.

She had asked Emperor Naruhito for permission to say a private prayer and it was granted.

Mako will leave the imperial family when she marries Komuro.