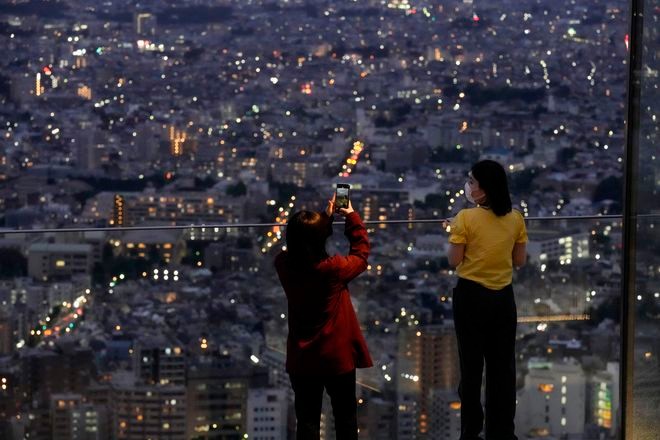 Visitors take pictures from the Shibuya Sky observation deck in Tokyo on Oct. 9, about a week after Japan fully came out of a coronavirus state of emergency. (AP Photo)

The latest tally was down 41 from a week ago and brought the daily average of new infections in the capital over the week through Oct. 19 to 51.7, or 51.9 percent of the figure for the preceding week.

Metropolitan officials also reported 13 deaths among patients in their 30s to 80s in Tokyo.

The number of serious cases in the capital requiring ventilators or extracorporeal membrane oxygenation, also known as an ECMO lung bypass machine, fell by five from the previous day to 26.

Of Tokyo's 36 new cases, seven patients, the most, were in their 20s, six patients in their 50s and five aged 9 or under. Four patients aged between 10 and 19 tested positive as did four in their 30s and four in their 40s. Six patients were aged 65 or older.